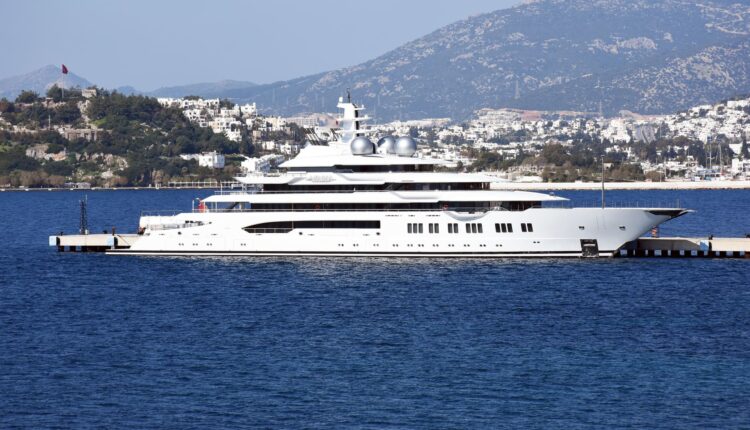 The 106m-long and 18m-high super luxury motor yacht Amadea, one of the largest yacht in the world is seen after anchored at pier in Pasatarlasi for bunkering with 9 fuel trucks, on February 18, 2020 in Bodrum district of Mugla province in Turkey.

A $325 million superyacht that American authorities say is owned by Russian oligarch Suleiman Kerimov was sailing to the United States on Tuesday from Fiji after that island nation’s high court allowed its seizure.

The 350-foot yacht Amadea — outfitted with a helipad, swimming pool and lobster tank — had been the subject of a weeks-long dispute over its ownership after the U.S. Department of Justice tried in early May to take possession of it in Lautoka, Fiji.

The seizure effort was part of the DOJ’s “KleptoCapture” campaign to punish Russian billionaires in response to their country’s invasion of Ukraine, and the latest in a series of similar actions by other Western countries targeting Russian luxury yachts.

Kerimov was sanctioned by the Treasury Department in 2018 for allegedly profiting from the Russian government through corruption and its illegal annexation of Crimea in Ukraine in 2014.

The eight-cabin Amadea left Fiji a day after a federal judge in New York signed a warrant authorizing the DOJ to seize two jets owned by another Russian oligarch, Roman Abramovich, which have a combined value of more than $400 million.

“The United States is deeply grateful to the Fijian police and prosecutors whose perseverance and dedication to the rule of law made this action possible,” DOJ spokesman Anthony Coley wrote in a tweet featuring photos of the Amadea setting sail to the U.S. under a new American flag.

The yacht was moved away from Fiji within hours of the nation’s Supreme Court ordering that public interest demanded that the ship “sail out of Fiji waters,” as the cost of berthing it there was “costing the Fijian government dearly,” according to the judgment reported by Reuters.

The judgment noted that Amadea “sailed into Fiji waters without any permit and most probably to evade prosecution by the United States.”

The Amadea has operating costs of between $25 million and $30 million annually, according to the FBI. Fiji’s government had been paying those costs during the legal fight over the seizure.

The yacht is registered to Millermarin Investments, which argued that Kerimov didn’t own the ship and opposed the seizure in Fijian court.

A lawyer for Millermarin, Feizal Haniff, claimed that the yacht’s real owner was another Russian, Eduard Khudainatov, the former CEO of the state-controlled oil and gas company Rosneft. Khudainatov is not a target of sanctions by the U.S. or the European Union.

Haniff also had argued that the U.S. did not have jurisdiction to seize the ship in Fiji until the ownership question could be resolved there by a court.

Khudainatov is also listed on documents as being the owner of another superyacht, the Scheherazade, which is valued at $700 million. The Scheherazade has been linked to Russian President Vladimir Putin, who, like Kerimov, is the target of U.S. sanctions.

The FBI has said in a court filing that the fact that Khudianatov is listed “as the owner of two of the largest superyachts on record, both linked to sanctioned individuals, suggests that Khudainatov is being used as a clean, unsanctioned straw owner to conceal the true beneficial owners.”

Last month, when the U.S. first tried to seize the Amadea, Deputy Attorney General Lisa Monaco wrote that she had previously “warned that the department had its eyes on every yacht purchased with dirty money.”

“This yacht seizure should tell every corrupt Russian oligarch that they cannot hide, not even in the remotest part of the world,” Monaco wrote.

“We will use every means of enforcing the sanctions imposed in response to Russia’s unprovoked and unjustified war in Ukraine.”