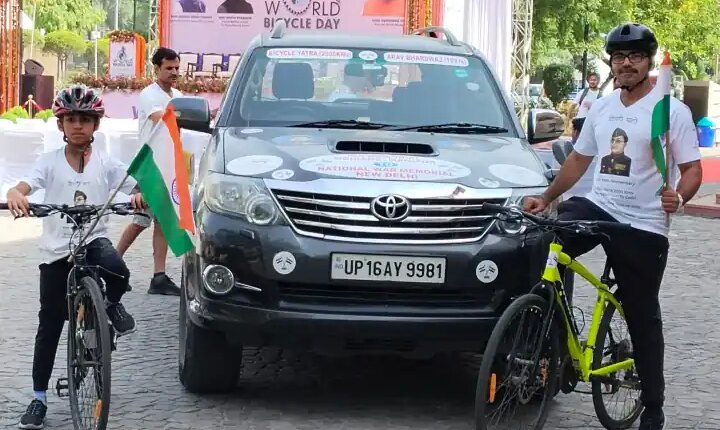 World Bicycle Day: 10-year-old Aarav, a resident of Delhi, along with his father Atul Bhardwaj completed the distance from Manipur to Delhi (Manipur-Delhi) by bicycle. This distance is 2500 km. Today is World Bicycle Day. This father-son duo also came to Dhyan Chand Stadium in Delhi. During this, ABP News spoke to both of them in detail about this wonderful journey.

Aarav, 10, told that I started the journey from INA Memorial Moirang (Manipur) on 14 April and ended the journey on 15 May at National War Memorial, New Delhi. Aarav said that I have done this yatra for the 75th year of independence and 125th birth anniversary of Netaji Subhash Chandra Bose.

What kind of difficulties did you face along the way?
On what kind of trouble Aarav faced during this journey, Aarav explains that sometimes it was hot and sometimes it was raining. Sometimes we had to walk on the mountain, I practiced well on this, so I was able to do it. Aarav further said that he completed this journey in 32 days. During this, his father Atul Bhardwaj was also present together. Atul is a doctor by profession. Doctor Atul Bhardwaj says that this plan was of my son and my father.

How many days of practice?
He said that when our PM Shri Narendra Modi Ji had unveiled a hologram statue of Netaji Subhas Chandra Bose at the National War Memorial when he (Aarav and Atul’s father) had made a plan in the last week of January. Dr. Atul says that we started its training in February. We had only 2 months to practice. Like many children cycle in the locality for one and a half to two hours, similarly Aarav also used to cycle in the locality.

Dr. Atul said that I again got Aarav’s practice practice. Made traffic sense on the road. We covered 25 kms for 1 week. Dr Atul says that along with this, the training of the last week was 80 km per day. We used to practice on the road. When we thought we could do it, we executed our plan.

When he came to know about the motive of our journey, he was very happy. Our visit was flagged off by Manipur CM N Biren Singh and then UP Deputy CM Brijesh Pathak also flagged off in the middle. And finally, Colonel Akash, Director of the National War Memorial in Delhi, presented Aarav with the Indian Armed Forces Medal and facilitated it at the National War Memorial.

What did Aarav say about the future?
When asked about his future, Aarav says that he wants to go to the army, along with this, Aarav says that he will try to stay in the army with a bicycle. He said that I will try to be involved in both. At the same time, Aarav’s father said that whatever his son wants to do, he will cooperate in it. He said that if he wants him to go to the Defense Force, then I will definitely support him. Second, his dream is to retain the stamina he has built at this age and go to the Olympics.

How to find affordable vacation airfare