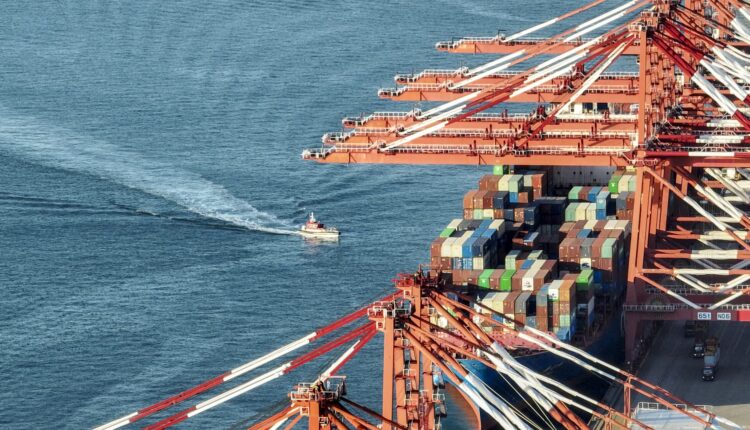 Aerial view of shipping containers and cranes at Qingdao Port on May 30, 2022 in Qingdao, Shandong Province of China.

First, it was the pandemic. Then came the Russia-Ukraine war. With two major global crises back-to-back, there could be some lasting changes in supply chains and trade, experts warn.

The war in Ukraine, in particular, has caused countries to think about the need for more dependable trading partners.

Energy prices soared this year as Russia’s onslaught in Ukraine destabilized the markets and Western nations slapped sanctions on Moscow.

This week, the European Union agreed to ban 90% of Russian oil imports by the end of this year. Moscow also previously threatened to cut off supply in retaliation. That has driven a Russian official to say the country will find other importers — oil purchases from China and India have already shot up this year.

The European Union receives about 40% of its natural gas from Russian pipelines and about a quarter of that flows through Ukraine.

Crucial grain exports, such as wheat, have been affected.

Millions of tons of wheat from Ukraine, one of the world’s biggest wheat exporters, have been stuck in the country, unable to get to countries that need them. That’s because Russia’s military forces have been blocking the Black Sea, where key Ukrainian ports are.

Before the war, Ukrainian Black Sea ports accounted for around 90% of its grain exports, according to Andrius Tursa, Central and Eastern Europe advisor at consulting firm Teneo Intelligence.

Referring to the war as well as the pandemic, Martin added: “These forces could lead to a lasting realignment of global trade. The global economy becomes more regionalised — shorter supply chains with ‘reliable’ partners.”

Martin said it’s “not the end” of globalization, but that global trade could reorganize into two or more “distinct blocs.”

The first bloc would comprise of European Union, U.S. and their allies — who have slapped sanctions on Russia, and are aligned in isolating Russia, according to Martin. Those allies could include U.K. and Japan.

Another group may be countries that will seek to straddle both sides.

“There will be a bloc of nations like China and India that maintain trade with both the sanctioning allies and Russia – they could take more energy and resources from Russia but need to maintain good relations with the large economies in the first bloc which account for a significant proportion of their export demand,” said Martin.

“Trade routes by both land and sea and the volumes passing along them will be impacted,” Martin also said.

Since the war started, shippers have avoided the Black Sea, where Russia’s military activity has blocked commercial shipping. That’s caused congestions in other ports in Europe because shippers have had to change their routes.

Russia will likely be the biggest loser as, although it can pivot some trade links, it will become excluded from a large proportion of the global economy.

“Russia’s military activity in the Black Sea, its constant attacks on Ukrainian ports, and heavy mining in the waters surrounding the ports make commercial shipping impossible,” Tursa wrote in a May 25 note.

Ukraine is now trying to develop alternative land and river routes to export food products to other countries.

“Although the capacity of alternative routes is expected to increase gradually, such exports will likely be more complex and costly compared to the sea route. Russia’s missile strikes targeting railway infrastructure across Ukraine could further complicate logistics,” Tursa said.

Any diversion as a result of changes to global trade would cause some economies to benefit, such as Southeast Asia, Latin America and Africa, according to Martin.

“Exports will … be diverted requiring new markets to be found for goods and services, and logistics put in place to accommodate the new trade flows,” he said.

“Russia will likely be the biggest loser as, although it can pivot some trade links, it will become excluded from a large proportion of the global economy,” Martin said.

The lockdowns in China, the world’s manufacturing hub, have also contributed to the turmoil experienced by the shipping and trade industry.

“What we are expecting to see in the coming times is clearly a lower reliance on the Big East-West trade routes between China and Europe, as well as China and the U.S. That’s typically the stretches where you have mega vessels calling anything between two and five stops in China,” said Christian Roeloffs, founder and CEO of container booking firm Container xChange.

Routes could change and may benefit some Southeast Asia countries such as Vietnam, where more companies are already manufacturing their goods.

On the other hand, places like Singapore — where ships commonly pass through on the way to the U.S. —could lose out, he added, explaining that Singapore may be bypassed as shippers go from the emerging manufacturing hubs of Vietnam and Cambodia directly to the U.S. West Coast.

“Some companies are starting to produce closer to home in order to limit delivery delays due to plant closures, reduced labor supplies, and other factors,” said Jason McMann, head of geopolitical risk analysis for Morning Consult.

They may also shift to maintaining larger inventories “as a cushion against future disruptions,” as opposed to having shorter supply chains, he added.