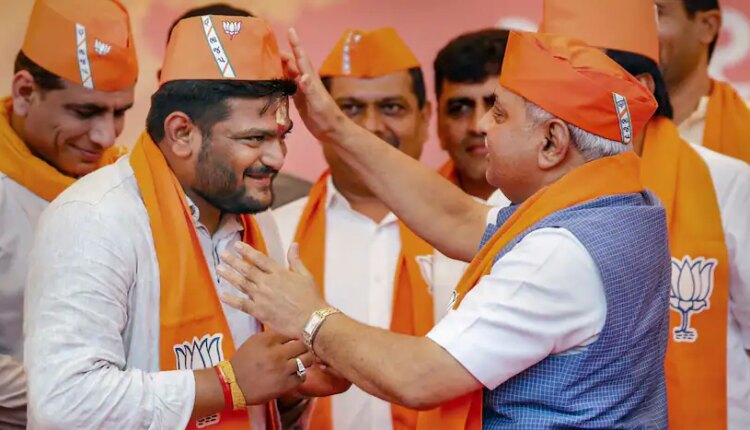 Hardik Joins BJP: Hardik Patel, who became a leader of the Gujarat Patidar Movement, finally joined the BJP. Hardik, who joined the Congress after the movement, joined the BJP party after resigning from there. After joining the party, Hardik Patel has said that he wants to work as a small soldier of PM Narendra Modi. He has also tweeted in this regard. Recently, Hardik had resigned from the post of state working president of Congress.

Hardik Patel joined the party in the presence of BJP state president CR Patil in Ahmedabad. Patel has joined the party at a time when Gujarat assembly elections are due later this year. BJP has been in power in the state for more than two decades. After joining the party, Hardik Patel called Prime Minister Narendra Modi the pride of the country.

Will work as a small soldier – Hardik Patel

Hardik Patel said that the Prime Minister should move forward in this noble work of national interest, state interest, public interest and social interest. Narendra Modi I am starting a new chapter to work as a small soldier in the work of national service that is going on under his leadership. He said that till today I have not made any kind of demand anywhere in the greed of the post. I left Congress also asking for work and in BJP also I am joining the definition of working. Weak people worry about location. Strong people never worry about location.

Patidar society has a good hold

Hardik Patel has a good hold in the Patidar community in Gujarat. Hardik Patel reached the political stage in the year 2015, when he led the Patidar reservation movement in Gujarat. An atmosphere was created while campaigning for the 2017 State Assembly Elections. Before the 2019 Lok Sabha elections, Hardik Patel had joined the Congress in the presence of Rahul Gandhi. Then, he was given the responsibility of working president of Gujarat Pradesh Congress Committee in 2020. However, he resigned this month accusing the Congress leadership of sidelining him while taking important decisions.

read this also: Gujarat BJP: Hardik Patel of BJP, posters were put up outside BJP office to welcome, worship before joining the party