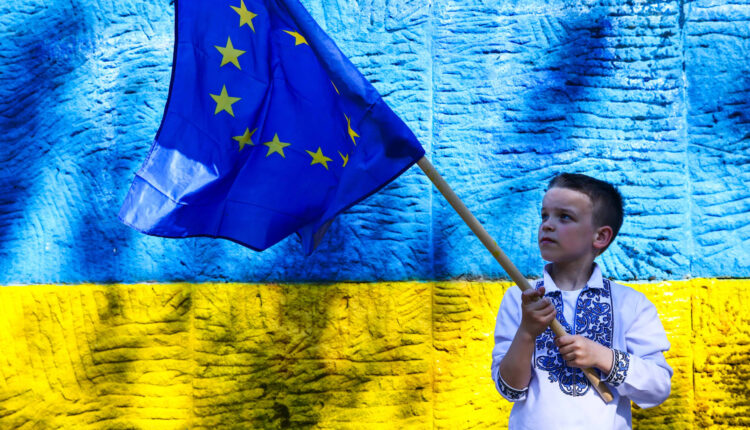 Ukraine has requested to become a member of the EU, but the process is likely to take some time and it is unclear if there is a broad support to accept several new nations in the bloc.

The European Union could be about to throw its support behind Ukraine becoming its newest member, but the process will not be easy: not only the country is still at war, but several other nations are keen to join — and have been for some time.

Just days after Russia started its unprovoked invasion of the country, Ukraine sent a letter to the EU to formally start its application process.

Since then, several EU officials have come out in support of Ukraine joining the bloc, but they have also been clear this would be a long process, even if they try to speed things up given Ukraine’s circumstances.

The European Commission, the executive arm of the EU, is expected to issue an opinion on Ukraine joining the EU in the next few weeks — but this will likely just mark the start of a long and difficult journey.

Even the European Parliament’s President Roberta Metsola has admitted that accepting new members into the EU can be challenging.

“Enlargements are always complex — you have different countries, different paths, different steps to take, different rules to abide by. But this is the moment we need to send the strongest of political message: Ukraine belongs in the European family,” she told CNBC last month.

According to Daniel Gros, from the Brussels-based think tank CEPS, receiving political support to join the EU represents “a moral boost to Ukraine and a signal to Russia that the EU will not be deterred.”

But for the EU, supporting Ukraine’s membership bid is a delicate balancing act which affects many countires.

What about the others?

Nations in the Western Balkans have long been promised accession, for example — including North Macedonia, which even changed its name in an effort to bolster its chances of joining the EU — but negotiations have yet to begin.

“Particularly against the background of the war in Ukraine, we have to remain vigilant and give the same priority to the Western Banks as to Ukraine,” Austrian ministers Alexander Schallenberg and Karoline Edtstadler said in a letter to the EU’s top diplomat Josep Borrell late last month.

“We cannot allow ourselves to create first and second-class candidates.”

The risk for the EU is that it is seen to be giving preferential treatment to Kyiv — upsetting other parts of the continent and potentially pushing them closer to Russia.

“We want and need those countries firmly anchored in our camp, the one of the European model of life, we need to demonstrate to them that they are key partners and that we are serious about their European future,” the Austrian ministers said in the letter.

The European Commission, the executive arm of the EU, was not immediately available for comment when contacted by CNBC Tuesday.

Even after it publishes its opinion on Ukraine joining the bloc, it will likely be years before member states are given the opportunity to approve Kyiv’s accession, to a large extent because Ukraine will have to implement several economic and political reforms to comply with European rules.

However, European Commission President Ursula von der Leyen has been vocal about Ukraine belonging in the EU. Last month, she advocated for financial aid for reconstruction as a way to also help Ukraine’s accession to the bloc.

“It could set a system of milestones and targets to make sure that European money truly delivers for the people of Ukraine, and is spent in accordance with EU rules. It could help fight corruption, align the legal environment with European standards and radically upgrade Ukraine’s productive capacity,” she said in the European Parliament, adding that “eventually, it will pave the way for Ukraine’s future inside the European Union.”

But political experts think full membership for Ukraine is some way off.

“While Ukraine joining the EU anytime soon is unlikely, there is a clear shift in attitudes towards enlargement amongst EU leaders who have realized that keeping countries that want to become members on hold is very frustrating and opens the door to democratic backsliding and non-EU influence from Russia, from China,” Anna Rosenberg, partner at advisory firm Signum Global, said via email.

“So, yes, EU leaders are now somewhat more open to enlargement than before the war, but it nevertheless remains very difficult – problems with countries like Hungary are evidence for that. No EU leaders wants to allow a second Hungary into the bloc,” she added.

Hungary, which joined the EU in 2004, has long been a thorn in the side of Europe’s institutions.

This is most recently evident in the decision to impose an oil embargo on Russia. The European Commission made the proposal back in early May, but Hungarian Prime Minister Viktor Orban led a coalition of a handful of countries in negotiating carve-outs. This dragged the process out for much longer than initially expected.

“The EU with 27 is often ungovernable and it is in my opinion hard to see new members being admitted to the club without Treaty revisions of the kind that [French President Emmanuel] Macron proposed, more qualified majority voting and more fiscal integration,” Jacob Kirkegaard, from the Peterson Institute for International Economics, said via email.

Currently — and as demonstrated by the recent impasse over the Russian oil embargo — key foreign policy decisions require unanimity.

This is already at times difficult, given that the EU is made up of 27 countries with often entirely different domestic priorities. And it could become even harder if the group is expanded.

Yet another complication is the fact that there is currently no clarity as to when Russia’s war in Ukraine will end.

“A prerequisite for a meaningful accession process is not just that Ukraine wins the war in the sense that they need control over their own territory, but that an actual peace agreement is signed with Russia,” Kirkegaard said, adding that “a frozen conflict situation will not give Ukraine EU membership.”

“Question of course is how to achieve that, given that in a sense Moscow does have a veto over Ukraine’s possible EU accession – no peace deal, no EU membership in the end.”