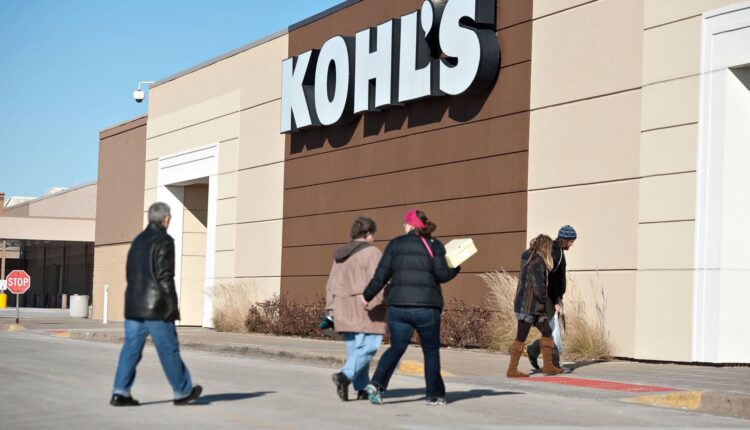 A little-known conglomerate of companies including the Vitamin Shoppe, Pet Supplies Plus and a home furnishing chain called Buddy’s is suddenly the talk of the retail industry.

Franchise Group, a publicly traded business with a market capitalization of about $1.6 billion, has entered into exclusive sale talks with Kohl’s. It proposed a bid of $60 per share to acquire the retailer at a roughly $8 billion valuation. Franchise Group and Kohl’s are in a three-week window during which the two businesses can finalize any due diligence and final financing arrangements.

Questions have since been swirling about what this will all mean for Kohl’s, should a deal go through: What will happen to the Sephora beauty shop-in-shops within Kohl’s, or the retailer’s returns partnership with Amazon? Will Kohl’s CEO Michelle Gass stay on with the company? Are store closings inevitable?

Also, why would Franchise Group want to own Kohl’s in the first place, as retailers including Kohl’s confront inventory challenges and inflation? Just a few weeks ago, Kohl’s slashed its financial forecast for the full fiscal year as more Americans pull back on discretionary spending. Meanwhile, investors are wrangling with rate hikes from the Federal Reserve and the potential for a recession in the near term.

The deal is still in flux, so those questions don’t have firm answers at this point. Instead, analysts and experts point to Franchise Group’s past track record and its recent acquisitions for a better sense of what Kohl’s future could hold.

Spokespeople from Franchise Group, Sephora and Amazon didn’t immediately respond to requests for comment on this story. Kohl’s declined to comment.

“What Franchise Group does is look for good businesses and well-known, strong brand names with a good consumer following,” said Michael Baker, a senior research analyst at D.A. Davidson.

“And then they have a different strategy on how to capitalize or how to monetize those acquisitions,” he added. “Sometimes it’s turning them from company-owned stores into franchise stores.”

Franchise Group was founded in 2019 through a $138 million merger between Liberty Tax and Buddy’s, according to the company’s website.

Under President and CEO Brian Kahn, who has a private-equity background, Franchise Group went on to scoop up Sears’ outlet business; Vitamin Shoppe; American Freight, which sells furniture, mattresses and appliances; Pet Supplies Plus; Sylvan Learning; and Badcock, a home furnishings chain that caters to lower-income households.

Franchise Group is mostly in the business of owning franchises. But the consensus is that Kahn likely won’t employ the same strategy at Kohl’s, which has more than 1,100 bricks-and-mortar stores across 49 states.

“The strategy there would be to work with the current management team to run [Kohl’s] better, or replace management if needed,” said Baker. “They’ve done that with some of their assets. … Kahn has a track record of doing good deals.”

Baker used Franchise Group’s most recent acquisition of Badcock, a deal valued at about $580 million, as one example. The company has since entered into two different sale agreements, one for Badcock’s retail stores and another for its distribution centers, corporate headquarters and additional real estate, to net roughly $265 million altogether. Rob Burnette remains in his role as Badcock president and CEO.

On an earnings call in early May, Franchise Group’s Kahn told analysts — without naming Kohl’s directly — what he looks for in any transaction.

“Management, for us, is always the key,” he said. “Whether we do very small transactions or very large transactions.”

“We’ve got a lot of conviction in the brands that we operate now,” Kahn also said on the call.

He added that all of Franchise Group’s past acquisitions generate plenty of cash to support the company’s dividend and to allow for further M&A activity, and any deals it considers in the future would also have to fit this mold.

Earlier this year, Kohl’s deemed a per-share offer of $64 from Starboard-backed Acacia Research to be too low. In late May, the retailer’s stock traded as low as $34.64 and it hasn’t been as high as $64.38 since late January. Kohl’s shares closed Wednesday at $45.76.

Franchise Group likely views its $60 per-share offer as a somewhat of a steal, particularly if the company can finance most of the transaction through real estate.

Franchise Group said in a press release earlier this week that it plans to contribute about $1 billion of capital to the Kohl’s transaction, all of which is expected to be funded through debt rather than equity. Apollo is lined up to be Franchise Group’s term loan provider, according to a person familiar with the matter. A spokesperson for Apollo didn’t immediately respond to CNBC’s request for comment.

Meanwhile, the majority of this deal is anticipated to be financed through real estate. CNBC previously reported that Franchise Group is working with Oak Street Real Estate Capital on a so-called sale-leaseback transaction. Oak Street declined to comment.

If it plays out this way, Franchise Group would receive an influx of capital from Oak Street, and it would no longer have Kohl’s real estate sitting on its balance sheet. Instead, it would have rent payments and lease obligations.

As of Jan. 29, Kohl’s owned 410 locations, leased another 517 and operated ground leases on 238 of its shops. All of its owned real estate was valued at a little more than $8 billion at that time, an annual filing shows.

“If Franchise Group can get the $7 billion or $8 billion out of the real estate, they’re only paying about $1 billion for the assets. So it’s pretty cheap,” said Susan Anderson, a senior research analyst at B. Riley Securities. “And I think [Kahn] wouldn’t do the deal unless he already has the sale lined up and agreements already in place.”

‘A playbook in place’

But some retail experts are pouring cold water on the plan, saying such a substantial real estate sale could end up putting Kohl’s in a much weaker financial position.

“This is completely unnecessary and will only serve to weaken the firm and restrict investments that are needed to revitalize the business,” said Neil Saunders, managing director of GlobalData Retail. “Takeovers of other retail businesses that have followed this model have never ended well for the party being taken over.”

To be sure, some sale-leaseback transactions, and particularly those on a much smaller scale, have been seen as successful.

In 2020, Big Lots reached a deal with Oak Street to raise $725 million from selling four company-owned distribution centers and leasing them back. It gave the big-box retailer additional liquidity during near the onset of the Covid-19 pandemic.

Also in 2020, Bed Bath & Beyond completed a sale-leaseback transaction with Oak Street, in which it sold about 2.1 million square feet of commercial real estate and netted $250 million in proceeds. Bed Bath CEO Mark Tritton touted the deal at the time as a move to raise capital to invest back in the business.

Franchise Group could be eyeing Kohl’s as a way to create more efficiencies on the backend, between all of its other businesses, according to Vincent Caintic, an analyst at Stephens. Cobbling together resources such as fulfilment centers and shipping providers could be a smart move, he said.

“They have the furniture stores, a rent-to-own store, and a lot of them deal with consumer goods,” Caintic said. “Maybe they can get some additional pricing power by becoming a larger player.”

At the same time, he said, this would be Franchise Group’s largest acquisition to date, which could come with a steeper learning curve.

All of Franchise Group’s retailers combined did $3.3 billion in revenue in the calendar year 2021. Kohl’s total revenue surpassed $19.4 billion in the 12-month period ended Jan. 29.

“Franchise Group has a history of buying businesses, levering them up, and then freeing up capital very quickly to pay off that debt,” Caintic said. “They do have a playbook in place.”

But, he added, the companies Franchise bought before it pursued Kohl’s were much smaller – “And those were done when it was very cheap to get debt.”