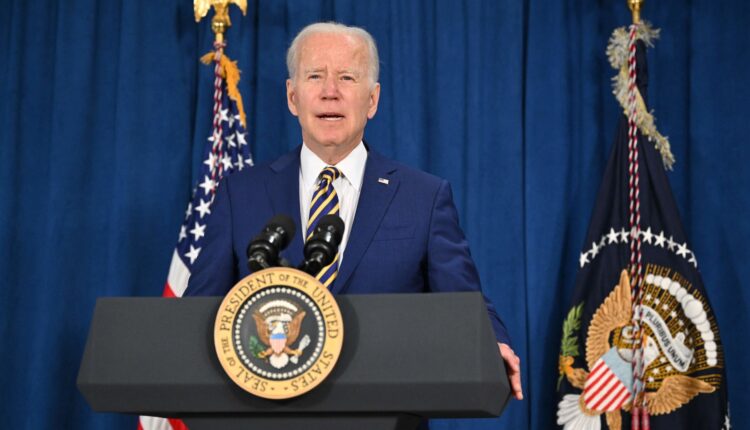 US President Joe Biden speaks about the May 2022 Jobs Report from the Rehoboth Beach Convention Center on June 3, 2022, in Rehoboth Beach, Delaware.

The White House is now planning a broader trip to the Middle East next month, sources said.

“We are working on a trip to Israel and Saudi Arabia for a GCC+3 Summit,” a senior administration official told NBC News. “We are working to confirm dates. When we have something to announce, we will.”

The reason for the delay wasn’t immediately clear. The foreign diplomat and two officials said they learned of the postponed travel plans on Friday. The U.S. officials added that the dates remained in flux and could change again.

The White House declined to comment on the travel itinerary. The Israeli and Saudi embassies in Washington didn’t immediately respond to inquiries late Friday.

Biden’s plans to visit Saudi Arabia came under swift scrutiny given the country’s human rights record and the president’s own past comments about the oil-rich country. On the campaign trail, Biden promised to treat as a “pariah” following the killing of journalist Jamal Khashoggi in the Saudi Consulate in Istanbul. The CIA concluded in 2018 that Crown Prince Mohammed bin Salman, Saudi Arabia’s de facto ruler, had ordered Khashoggi’s killing. The crown prince has denied any personal involvement in his death.

A group of relatives of victims of the Sept. 11 terrorist attacks wrote to Biden this week saying that if he travels to the kingdom, he must raise issues of “accountability” over alleged ties between some of the 9/11 hijackers and Saudi officials.

Yet Saudi Arabia, a close U.S. economic and military ally, has traditionally been one of the first foreign stops a president makes in the Middle East. The Biden administration has found it difficult to avoid cooperating with Saudi Arabia given its major role in many of the top foreign policy issues confronting the Biden administration, including Israel-Palestinian tensions and the Iran nuclear deal.

Biden has also been looking for ways to help drive down the price of oil and gas as his administration faces ongoing pressure to do more to lower the price of fuel heading into the midterm elections.

NBC News reported Thursday that Biden was expected to visit Saudi Arabia and Israel this month, citing five sources with knowledge of the matter.

The White House never publicly confirmed those travel plans. But sources told NBC News that the Biden administration had informed other countries that the visits were happening in late June, and that the White House and State Department were preparing for the visits.

Biden, asked by a reporter on Friday morning about reports of trip to Saudi Arabia, said a stop was possible but that was “not sure whether I’m going.”

“I have been engaged in trying to work with how we can bring more stability and peace to the Middle East. And there is a possibility that I would be going to meet with both the Israelis and some Arab countries at the time, including, I expect, would be Saudi Arabia, would be included in that if I did go,” Biden said. “But I have no direct plans at the moment. We’re looking at it.”