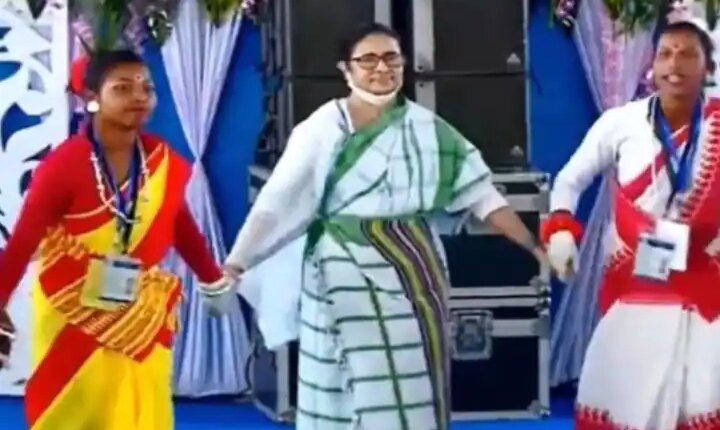 Mamata Banerjee Dances With Folk Artists: West Bengal CM Mamta Banerjee (CM Mamata Banerjee Once again she has come into the limelight due to her unique style. Sometimes Mamta used to play football among the crowd and sometimes due to her dialogues, she manages to make a place in the hearts of her supporters. In this sequence, his new style is being seen once again on social media.

In fact, in a recent video, CM Mamta Banerjee is seen dancing with folk artists in Alipurduar, Bengal. According to ANI, CM Banerjee had reached Alipurduar to attend a mass marriage ceremony. During this, he also performed a traditional dance with the people present there.

joked about the stomach of the worker

Mamta is also very much liked for her funny style. Recently, a video of him was going viral on social media, in which he had seen the growing stomach of one of his workers and said that his stomach is becoming Madhya Pradesh. Will fall someday. Seeing Mamta’s funny style in that video, the worker also told that the reason for her growing stomach is that she eats pakodas every morning.

Earlier, West Bengal CM and TMC chief Mamta Banerjee had thrown football among the people in the style of ‘khela hobe’ before the press conference in Lucknow. After this, Mamta Banerjee also showed the victory sign with Akhilesh Yadav. Let us tell you that during the elections in West Bengal, Mamta Banerjee was seen throwing football from the stage many times.

Coronavirus: Corona cases increased by 80% in Maharashtra in 24 hours, 83% jump in Mumbai, expert said this