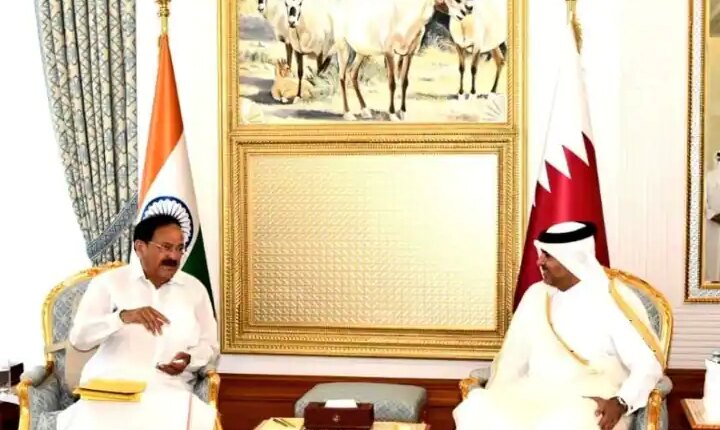 Naidu was accorded a ceremonial welcome at the Doha airport on his arrival here on Saturday and was accorded a guard of honour. The Vice President has reached the Arab country on the last leg of his three-nation tour from May 30 to June 7. The Indian community also welcomed him upon his arrival. His visit to Qatar comes at a time when the two countries are preparing to celebrate the 50th anniversary of the establishment of diplomatic ties. Foreign Ministry spokesman Arindam Bagchi said on Sunday that Vice President Naidu and Qatari Prime Minister Abdul Aziz Al Sani held delegation-level talks.

During this visit, Naidu is also scheduled to meet several other dignitaries from Qatar. He will also address the Business Roundtable in Qatar. The Ministry of External Affairs said in a statement that people-to-people contacts are at the heart of the historic relationship between India and Qatar. There are more than 750,000 Indians in Qatar. The multi-faceted cooperation between the two sides has seen significant growth in economic, energy, investment, education, defense and cultural ties, the statement said.

It said that in the fiscal year 2021-22, bilateral trade has crossed $ 15 billion. Qatar has also committed to invest more than $2 billion in various Indian companies over the past two years. Naidu arrived here from Senegal where he emphasized the vital role of the legislature in the life of a nation and lauded Senegal’s democratic ethos, making it India’s natural development partner.

This year marks 60 years of establishment of diplomatic relations between India and Senegal. Naidu’s visit to Gabon and Senegal was aimed at accelerating India’s engagement with Africa and emphasizing its commitment to the African continent.