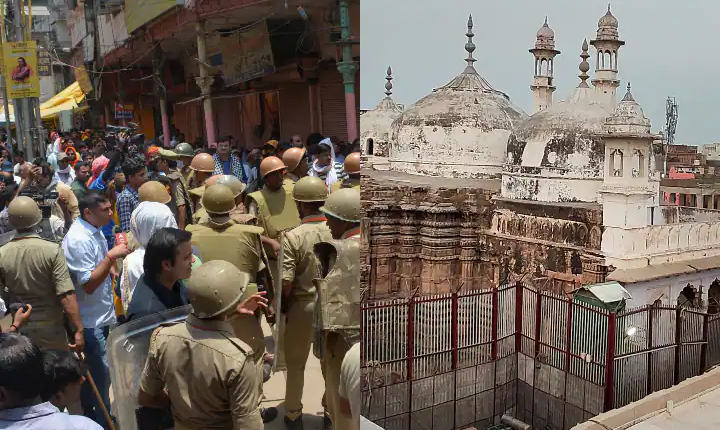 Hanuman Chalisa outside gyanvapi premises: It has been announced to recite Hanuman Chalisa outside the Gyanvapi Premises today. Along with this, Avamukteshwaranand is still adamant on the insistence of Jalabhishek. A petition filed by this organization will also be heard in the Varanasi Court today. Sant Samaj has come out on the streets on the claim of getting Shivling in the Vjukhana of Gyanvapi Masjid. This matter is in the court, but in Varanasi, every day a demand for worship is being raised through some organization or the other.

All India Gyanvapi Mukti Mahaparishad has once again announced to recite Hanuman Chalisa outside the Gyanvapi campus. According to the program, the idol of Hanuman ji present in the Kashi Vishwanath complex will be worshiped in the morning. After that Hanuman Chalisa will be recited and prayer will be done for the liberation of Gyanvapi.

Even before this people associated with this organization have worshiped here. At the same time, the All India Gyanvapi Mukti Mahaparishad has filed a petition regarding the demand for worship, in which the court has been demanded that they should be allowed to worship once a day. Hearing on this petition will also take place in the district court of Varanasi today. The organization said in the petition that we have a small demand that we should worship our idol once a day. Right to worship is a fundamental right of every Sanatan Dharma, so he has filed a petition in the court of District Judge through his lawyer Ramesh Upadhyay for permission to worship in Gyanvapi.

Avimukteshwaranand was adamant on offering water to Shivling

The police stopped Swami Avimukteswaranand, who had announced to offer water to Shivling in the Vazukhana of Gyanvapi Masjid located in Varanasi. On Friday, he Gyanvapi Mosque I had asked the administration for its permission by announcing the worship of Shivling. But the administration did not give permission and on Saturday, a police force was deployed outside his monastery. After which Swami Avimukteshwaranand got furious. He said that I sent the petition to the commissioner from my own mobile and sent my man along with the letter to the office of the deputy commissioner. I have proof. I will sit here and have food only after worship. We will accept the decision of the court. But will God remain hungry and thirsty till the court’s decision comes? We filed a review petition (for permission to pray) but got no response from the police.

read this also: Gyanvapi Masjid: Swami Avimukteshwaranand, furious when the police stopped him, said- ‘Will God be hungry and thirsty?…’

Left out of the Indo-Pacific deal, China pushes toward RCEP trade deal