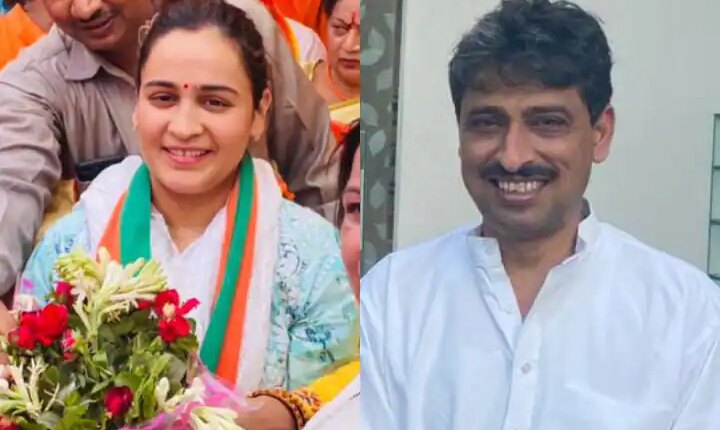 UP Legislative Council Election 2022: BJP and Samajwadi Party (SP) have released the list of candidates for the Legislative Council elections from UP. Both the parties have announced the names of their leaders today. BJP has 9 candidates in the fray. Out of these, there are 7 such who are ministers in the Yogi government but are not members of any house. According to the rule, it is necessary to become a member of either house within six months of becoming a minister.

Keshav Prasad Maurya is the Deputy CM in UP and he lost the assembly elections from Sirathu. He is the first name in the list of BJP. The party has also given MLC tickets to Bhupendra Chaudhary, Dayashankar Mishra Dayalu, JPS Rathore, Narendra Kashyap, Jaswant Saini and Danish Azad Ansari. These are all ministers. Apart from this, BJP has also nominated Banwari Lal Dohre and Mukesh Sharma. Dohre belongs to Kannauj and the party did not give him a ticket in the last election. He is a Dalit leader.

Mukesh Sharma got the ticket due to the blessings of Defense Minister Rajnath Singh. He is the Metropolitan President of BJP in Lucknow. Rajnath Singh wanted him to get a ticket in the recently held assembly elections. But Mukesh could not get the ticket. But this time with Rajnath’s lobbying, he made his place in the list.

Aparna had joined BJP before the elections

There was a big discussion that Mulayam Singh Yadav’s younger daughter-in-law Aparna Yadav can be made BJP MLC. Just before the elections, she left the Samajwadi Party and joined the BJP. She wanted to contest elections. She also contested from Lucknow Cantt on Samajwadi Party ticket but was defeated by Rita Bahuguna Joshi. Despite the estrangement, Akhilesh and his wife Dimple campaigned for him. But he did not put any such condition for joining BJP.

In the election, the party made him a star campaigner. He campaigned fiercely against the Samajwadi Party. The party also used it against Akhilesh Yadav and his family. This message was given that Akhilesh Yadav can’t even handle his family, then how will he handle the party and the government. When Aparna joined BJP in Delhi, the party’s national president JP Nadda, Chief Minister Yogi Adityanath, Deputy CM Keshav Prasad Maurya and party’s state president Swatantra Dev Singh were also present. The party made it a mega show. In this sense, it is being understood that Aparna may get the reward of MLC ticket for further politics. But this time his part was only waiting.

Imran Masood was camping in Lucknow

Something similar has happened to Imran Masood in the Samajwadi Party camp. Just before the elections, he left the Congress party and took a bicycle ride. Imran, who contested every election, kept on campaigning only this time. Akhilesh Yadav did not give him a ticket and assured that the party would respect him if he won the election.

The Samajwadi Party lost the election and Imran’s hopes were dashed. Before the release of the list, he had camped in Lucknow. But he did not get the ticket. Disappointed, they have returned to Saharanpur. Since 2002, Imran has been contesting every assembly election. He contested the 2014 and 2019 Lok Sabha elections on a Congress ticket but lost both the times. Imran was in a lot of controversies by making this statement that I will cut Modi’s bow and bone.

Because of this, Akhilesh had convinced him not to contest the election to stop the communal polarization. Out of the four people who have been given tickets by the Samajwadi Party for MLC, two faces are Muslims, but the part of Imran Masood came only waiting. On the insistence of Samajwadi Party leader Azam Khan, Shahnawaz, son of his supporter Sarfaraz Ahmed, got the ticket.

Affirm shares are set to drop another 40% as rates rise and economic growth slows, Wedbush says