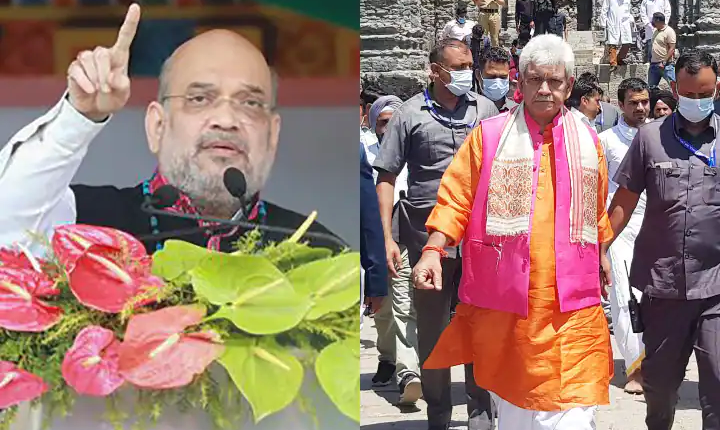 Security Meeting On J&K: A big decision can be taken today regarding the attack on Kashmiri Pandits and non-local people in Kashmir. To handle the deteriorating situation due to target killing, Home Minister Amit Shah himself has now taken the lead. Amit Shah has called a big meeting regarding the terrorist attacks and the security of the Valley. Jammu and Kashmir Lieutenant Governor Manoj Sinha, senior officials of the Ministry of Home Affairs and officials of the Union Territory will attend the meeting to be held in Delhi today. This is the second meeting being held within the last 15 days regarding the situation in Jammu and Kashmir.

A big decision can come on target killing

In the meeting, there will be a discussion on the security arrangements for the Amarnath Yatra starting in the end of June, from the killing of common people in the valley. During the last meeting, Home Minister Amit Shah had given special emphasis on anti-terrorist operations. The terrorists have created an atmosphere of panic in the valley by carrying out 8 target killings in the last 22 days. It is believed that a big decision can come from the Ministry of Home Affairs regarding target killing.

Earlier, hours after the killing of a Hindu bank worker by terrorists in the Kashmir Valley on Thursday, Union Home Minister Amit Shah called a meeting, which was attended by top officials including National Security Advisor (NSA) Ajit Doval. It is believed that during this time the security situation in the Union Territory was discussed where incidents of target killing are coming to the fore since May.

The discussions came a day ahead of a high-level meeting called by Shah on Friday on the security situation in Jammu and Kashmir. According to news agency PTI, Doval and intelligence agency RAW (Research and Analysis Wing) chief Samant Goel held talks with Amit Shah at his North Block office for about an hour in the afternoon.

Since May 1, there have been eight cases of targeted killings in the Kashmir Valley. A teacher hailing from Samba district of Jammu region was killed by terrorists in Kashmir’s Kulgam on Tuesday. At the same time, on May 18, terrorists entered a liquor shop in Baramulla in North Kashmir and hurled a grenade, killing a Jammu resident and injuring three others.

In the Valley, police personnel Saifullah Qadri was shot dead by terrorists in front of his residence in Srinagar on May 24, while TV actor Amrin Bhat was killed by terrorists in Budgam two days later. In the year 2012, Kashmiri Pandits working under the Prime Minister’s package are continuously demonstrating and are threatening to flee after the assassination of Rahul Bhat. Rahul Bhat was killed by terrorists on May 12 after barging into his office in Chadoora in central Kashmir’s Budgam district.

Today’s high-level meeting of Amit Shah on the security situation in Jammu and Kashmir is the second such meeting in less than a fortnight which is taking place amid the targeted killings by terrorists in the Valley. Doval is also expected to attend the meeting to be chaired by the Home Minister.

People leaving the valley for fear of security

The meeting is taking place in the midst of demonstrations demanding security by the Kashmiri Pandit community and some members of the community leaving the Valley after the target killings. Officials said that this year 12,000 additional paramilitary personnel are expected to be deployed on both the routes of the Amarnath Yatra, apart from the Jammu and Kashmir Police personnel. One way for Amarnath Yatra is through Pahalgam while the other way goes through Baltal. He said that the help of drone cameras would be taken to ensure the safety of the devotees. This year the Amarnath Yatra is expected to conclude on August 11 and three lakh devotees are expected to attend.