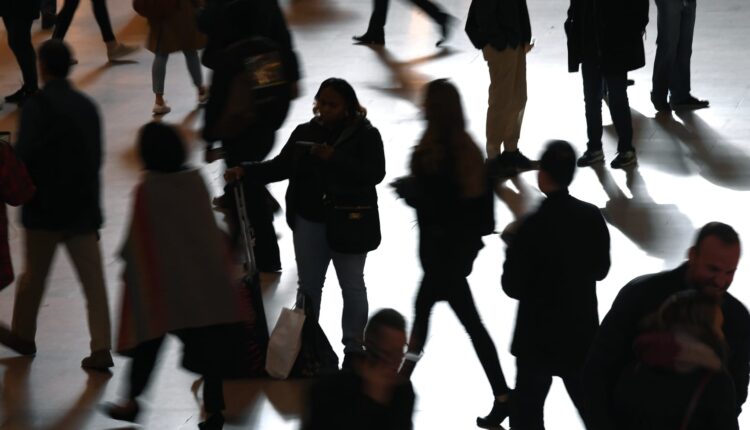 Silhouette’s of commuters and tourists as they make their way through Grand Central Terminal in New York City during the morning rush hour.

The U.S. unemployment rate for Black and Hispanic women rose sharply last month even as overall joblessness in the country held steady.

The overall job market saw the headline unemployment rate hold at 3.6% as the economy added 390,000 jobs, the Bureau of Labor Statistics said Friday. That unemployment rate was in line with April’s, and the job additions surpassed a Dow Jones estimate of 328,000.

However, the unemployment rate among Black and Hispanic women over 20 years old increased sharply to 5.9% and 4.7%, respectively, up from 5% and 3.8% in April.

“These inequities absolutely existed before the pandemic,” said Elise Gould, a senior economist at the Economic Policy Institute. “When we talk about returning to pre-pandemic levels, sure, we’re getting pretty close to that but that just bakes in the disparities we had in the pre-pandemic labor market and that’s just not good enough.”

The unemployment rate for white women was about half that of Black women, rising just 0.1% from the month prior. Unemployment rose for women (to 3.4%), Black Americans (6.2%) and Hispanic Americans (4.3%) overall but fell for Asian Americans (2.4%).

Even in during the Great Recession, unemployment rates for Black and Latino workers remained elevated as the overall rate dropped, said Nicole Mason, president and CEO of the Institute for Women’s Policy Research.

“This growth and recovery is not reaching everyone and it’s not going to reach everyone unless we improve our systems and policies to address those gaps and support these workers,” said Kathryn Zickuhr, a labor market policy analyst at the Washington Center for Equitable Growth. “Really, the time to do that is now because we are in this period of recovery. When things are going is when it’s time to plan for the next period of upheaval.”

Gould noted the importance of looking at longer-term jobs data to determine trends as the numbers can be volatile in the short term. Some groups are performing better than others month to month, but the longer-term trend is “moving in the right direction,” she said.

While unemployment rates rose for women, the labor force participation ticked up, a promising sign that more women are reentering the workforce and many are finding jobs, she said.

Across demographic groups, the labor force participation rate rose or held steady, meaning that people are returning even as Covid-19 lingers and the supply exists. Claims of labor shortages are “overblown,” Gould said.

“The pandemic, while it remains a factor in terms of people choosing how they re-enter the workforce, it is not as significant as it was in 2020,” Mason said.