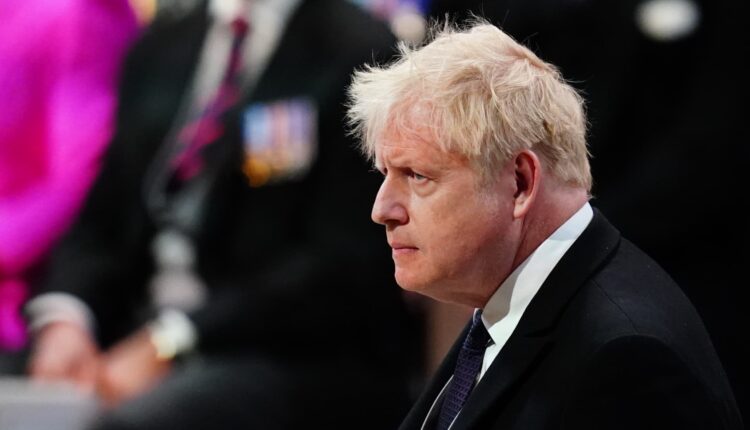 British Prime Minister Boris Johnson was booed by crowds as he entered St Paul’s Cathedral on June 3 for the National Service of Thanksgiving to celebrate the Platinum Jubilee of Queen Elizabeth II.

LONDON — U.K. Prime Minister Boris Johnson has survived a vote of confidence triggered by his own lawmakers amid increasing dissatisfaction in his leadership.

Some 211 Conservative Party lawmakers voted in favor of the prime minister on Monday, while 148 voted against him. Johnson needed the support of a simple majority of 180 MPs to win the vote, but the figure of 148 was worse than many expected.

It is also worse than the result of a similar vote faced by former leader Theresa May in 2018. She resigned as prime minister just six months later.

The secret ballot of Tory lawmakers comes at a time of deep dissatisfaction with Johnson’s leadership and behavior in office less than three years after he secured a whopping parliamentary majority.

Given the narrow margin of Johnson’s win, there is now a possibility that he might face another confidence vote in the near future.

Usually, if a British leader wins a confidence vote, they are protected from another vote for 12 months. However, there have been reports that these rules may be changed — and the close nature of Monday’s result could make this more likely.

Graham Brady, chairman of the 1922 Committee which oversees leadership challenges within the party, told reporters earlier Monday that while it’s “technically” possible for rules to be changed, “the rule at present is there would be a period of grace” before another vote takes place.

Johnson could also resign of his own accord, but despite previous rumblings of discontent among Tory MPs over Johnson’s colorful, and often controversial leadership, he has shown no signs of intending to do so.

The British pound was at 1.2529 against the dollar after the vote, barely moving after trading in a tight range for much of the session.

Calls for a confidence vote had grown louder after a report was released last month heavily criticizing the prime minister and other officials following a number of Covid-19 lockdown-breaking parties at Johnson’s office and residence in Downing Street.

The confidence vote was triggered after 15% of Conservative lawmakers (or 54 of the current 359 Conservative Party MPs) submitted letters of no-confidence to Brady.

The number of letters Brady received were not disclosed although some lawmakers had issued public declarations in recent weeks.

Opposition Labour Party leader Keir Starmer had called on Tory lawmakers to “step up, show leadership and get rid of him.”

Johnson’s public standing has been a source of concern for many Tory MPs and public sentiment toward the prime minister has become more negative since the “partygate” scandal.

On Friday, Johnson was booed when he arrived at St Paul’s Cathedral in London for a thanksgiving service in honor of Queen Elizabeth II and her 70 years on the throne, a milestone marked over the past four days with Platinum Jubilee celebrations across the U.K.

Conservative peer Robert Hayward told Sky News on Monday that footage of Johnson being booed, widely commented on in the British media, could have influenced more Conservative MPs to submit letters to Brady.

Tory MP John Penrose on Monday resigned as the prime minister’s anti-corruption tsar, saying it was “pretty clear” the prime minister had broken the ministerial code over the “partygate” scandal. Former Health Minister Jeremy Hunt, meanwhile, indicated he would be voting “for change.”

Nonetheless, most senior Conservative lawmakers — including the foreign secretary and chancellor — said they would back the prime minister.

A Downing Street spokesperson said ahead of Monday’s outcome that the vote was “a chance to end months of speculation and allow the government to draw a line and move on, delivering on the people’s priorities,” Sky News reported.

The deciding factor for many Conservative lawmakers was likely to be whether Johnson could lead the party to another election victory, which will be held no later than January 2025. Berenberg Bank Senior Economist Kallum Pickering summed up the choice that lawmakers faced as follows:

“Whether Johnson stays or goes will be decided on one factor – what outcome the Conservatives believe gives them the best chance at the next election,” he said in a note Monday.

“On the one hand, the case against Johnson is clear cut. Following escalating scandals and a souring economy, Johnson’s Conservatives are sliding badly in the polls … On the other hand, Johnson is a proven election winner – this counts for a lot,” he said, recalling that in the last snap election in 2019 Johnson won the biggest Conservative majority since 1987.

This is a breaking news story, please check back later for more.