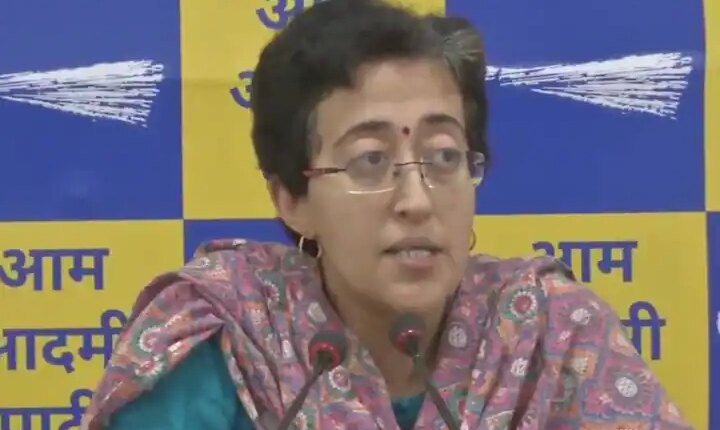 AAP On LG: In Delhi, once again there seems to be a situation of confrontation between the Kejriwal government and the Lieutenant Governor Vinay Kumar Saxena (LG VK Saxena). The Aam Aadmi Party today alleged that the new Lieutenant Governor of Delhi is not working according to the constitutional system of Delhi. Aam Aadmi Party leader and MLA Atishi said that the LG called a meeting with the Jal Board officials on Monday and after this meeting some instructions and orders were also given to the officials.

Atishi alleged that the information about this meeting was not given to the government. Neither the chairman of Delhi Jal Board nor the vice-chairman was informed about this. Raising questions on this meeting, Atishi said that the LG has come recently and perhaps he is not aware of the constitutional system of Delhi.

LG has got the responsibility of only 3 things

Atishi said that she does not know that perhaps there is a separate constitutional system in Delhi. That’s why I would like to tell the LG Sahab that under that constitutional system, the LG, who is the representative of the central government, has been clearly given 3 responsibilities by the Constitution. Their responsibility is land, law and order and police. This is clearly written in the Constitution of the country and the Constitutional Bench of the Supreme Court has also stamped on this matter that only and only these three subjects, land, law and order and police, come under the jurisdiction of the Lieutenant Governor, the representative of the Central Government. Huh.

LG is disturbing the constitutional system of Delhi

Atishi said that there is an even more special situation in Delhi that the new law of MCD has been passed. Therefore, the MCD also comes directly under the control of the Central Government. Atishi said that at present we should also assume that managing and getting the work done by the Municipal Corporation of Delhi also comes under the jurisdiction of LG, but all these issues like electricity, water, education, health, revenue, the elected government of Delhi, Along with the Chief Minister of Delhi and the Chief Minister comes under the jurisdiction of the cabinet ministers. This is what the Constitution of the country says and so does the Constitutional Bench of the Supreme Court. Therefore, the issues which come under the elected government of Delhi, when the LG sahib calls his departments for a meeting on those issues and gives orders and instructions to them, then he is disturbing the constitutional system of Delhi.

The people of Delhi will suffer

Atishi said that in such a situation, how will the governance of Delhi be that on one hand these officers will be called by the LG and the LG will give some guidelines and then the elected government, under which the Delhi Jal Board, Education Department, Health Department, Revenue Department comes, those Will call the officers, she will order something else. So what would an officer do? He will follow the order of LG sahib or will follow the order of the elected government or else he will not follow any order. MLA Atishi said that if the constitutional system of Delhi is disturbed, it is changed with the constitutional system of Delhi, then the government will stop running in the whole of Delhi and its loss will be only for the residents of Delhi.

Atishi said that if you want to solve any problem, then solve the problem of three garbage mountains of Delhi. I would like to tell the LG that if you roam all over Delhi, you will see that dirt is a big problem in the whole of Delhi. Cleanliness is not done properly anywhere in Delhi. For the last 15 years, MCD has completely failed in the matter of cleanliness. I would like to urge the LG sahib that if he has to solve some problem, then he should solve the problem of cleanliness in Delhi, solve the issue of women’s safety in Delhi.

Not interfering, LG working for the people of Delhi- BJP

At the same time, on this whole matter, BJP said that Delhi is not a full state and LG is the chief administrator of Delhi. Leader of Opposition in Delhi Assembly Ramveer Singh Bidhuri says that Lt Governor is not interfering but working for Delhi. If the complaint is coming to them that the people of Delhi are not getting drinking water for two to two days and whatever they are getting is dirty, people’s kidney and liver are getting damaged, stomach is getting worse, then If people are complaining like this to the Honorable Lieutenant Governor, then he is the Guardian of Delhi, is it not his responsibility to ask the officials why the people of Delhi are not getting clean water.

Kejriwal is unable to handle Delhi

At the same time, when he was asked the question whether the Lieutenant Governor is interfering? So on this Ramveer Singh Vidhudi said that from where did the talk of interference come, he is the Lieutenant Governor of Delhi (Delhi LG), it is a Union Territory and the LG is the Chief Administrator of Delhi, then Arvind Kejriwal. (Arvind Kejariwal) should understand this if he is not able to handle Delhi, he has been the chairman of Jal Board, now the Jal Board chairman has gone to jail. Now this situation has arisen. Ramveer Vidhudi said that there is no minister and if people are complaining that clean water is not being available and whatever is available is dirty, then the Lieutenant Governor of Delhi should inform the officials of Delhi Jal Board. Instructing that for the concern of the people, it is a matter of happiness for all of us.

read this also: Rajinder Nagar Bypoll: There is a churning in the BJP regarding the names of the candidates, know what is the demand of the workers