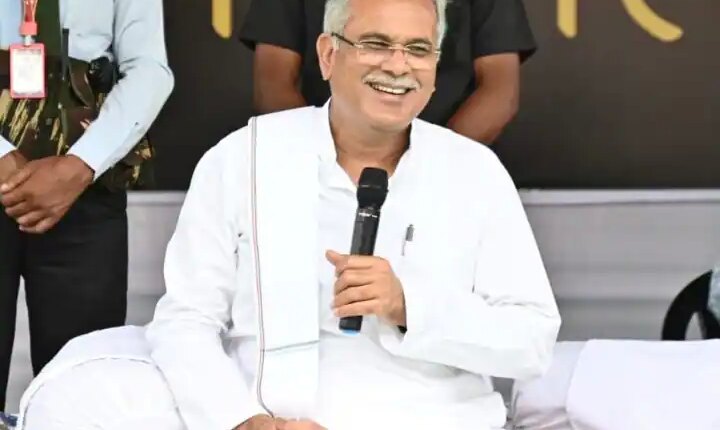 Hasdeo Aranya Forest: Chhattisgarh Health Minister TS Singhdeo has supported the movement to save Hasdeo Aranya forest. In this matter, now a big statement of Chief Minister Bhupesh Baghel has come. In Raipur, CM Bhupesh Baghel has said that if TS Singhdev wants, then the tree will not even be cut, there will be no chance of firing. The bullet will be fired only at the one who shoots. After this statement, the case of Hasdev Aranya has now come into the limelight.

TS Singhdev came in support of saving Hasdev Aranya
Actually, first of all let’s talk about the statement of Health Minister TS Singhdev. TS Singhdev had reached Hasdeo Aranya on Monday. He met the villagers sitting in the movement and saw the tree being cut. After this, he encouraged the villagers who were agitating to save Hasdev. He said that one should have an opinion, then if someone comes with a bullet gun, then call me. I will take the first pill, you will take the second pill. Along with this, TS Singhdev also told the villagers that Hasdev will talk to Rahul Gandhi about Aranya. Will inform them about it.

Big statement of CM Bhupesh Baghel on Hasdev Aranya
Here, after the support of TS Singhdev, a big statement of Chief Minister Bhupesh Baghel has come to the fore. Till now CM Bhupesh Baghel used to ask questions to the public regarding the movement that some people are doing politics in Hasdev. Those who are opposing it, they should cut the electricity of their homes first. If coal is needed, then the mine will have to be run. But now their tone has also changed.

Brijmohan Agarwal suggests TS Singhdev to resign from the post
BJP is also engaged in besieging the state government in the case of Hasdev Aranya. On Tuesday, BJP leader Brijmohan Agarwal has said in a press conference that 8 lakh trees will be cut in Hasdeo. Oxygen is more important or coal, if the pend is cut, the temperature will increase even more. Further, on the support of Health Minister TS Singhdev to save Hasdev, he said that TS Singhdev should resign from his post and fight in the field.