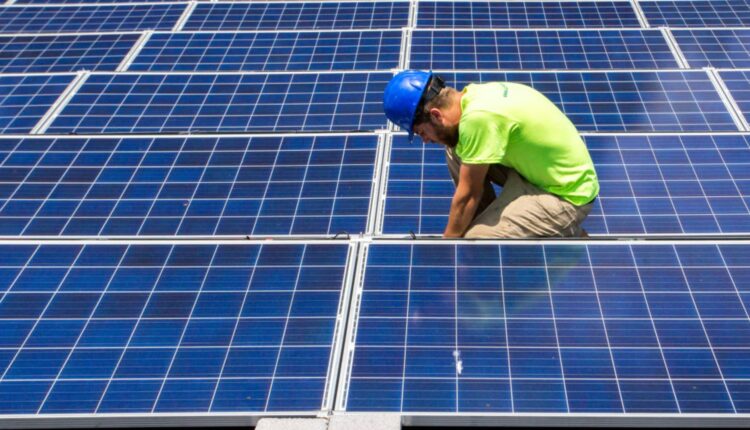 U.S. President Joe Biden’s move to prohibit new tariffs on the solar panels also took the teeth out of an investigation by the Commerce Department that was required by law.

Biden’s move Monday to prohibit new tariffs on the solar panels also took the teeth out of an investigation by the Commerce Department that was required by law. The Biden administration had previously tried to avoid interference in what’s supposed to be an independent, quasi-judicial process.

The investigation will go on uninterrupted, the Commerce Department said Monday. But nobody will be punished.

Senior Biden administration officials described the move to suspend the tariffs as creating a “bridge” — temporarily allowing cheap foreign solar panels to flood into the U.S. to speed the transition to clean energy, while using those two years to ramp up a fledgling U.S. solar manufacturing industry.

To achieve it, Biden must declare an emergency to justify sidestepping the tariff law.

“In this case, the emergency is a threat to the availability of sufficient electricity generation capacity to meet expected customer demand,” White House press secretary Karine Jean-Pierre said Monday.

The move brings to an abrupt, unexpected end a growing fight over the tariffs, with solar panel installers and climate activists accusing the Commerce Department of nearly incapacitating an industry that’s critical to the Biden administration’s goal of producing only clean electricity by 2035.

Solar power has always made for messy trade politics in the U.S.

Solar panel installers, who benefit when they can sell customers the cheapest panels possible, are often on the opposite side of major issues from solar panel manufacturers, who can’t compete with cheap imported products whose low prices are subsidized by foreign governments like China.

More than 80 percent of panels shipped in the U.S. are imported from overseas, according to the U.S. Energy Information Administration, including huge amounts from Vietnam, Malaysia and Thailand.

In this case, the Commerce Department was forced to open the investigation after Auxin Solar, an obscure solar panel manufacturer in California, filed a complaint alleging that China was illegally circumventing existing tariffs aimed at leveling the playing field for U.S. manufacturers.

Auxin’s complaint, which echoed an earlier failed complaint from an anonymous group of solar panel makers, alleges that Chinese state-supported solar panel manufacturers have been moving their factories to Malaysia, Vietnam, Thailand and Cambodia. That way, the complaint alleges, they can claim the panels weren’t made in China and avoid the U.S. tariffs.

The products, allegedly still subsidized by the Chinese government, then get “dumped” onto the U.S. market at prices far below what they cost U.S. solar panel makers to build them.

The investigation raised the prospect that solar panels imported from those countries could be slapped with new, high tariffs retroactively, a fear that industry experts say has created a chilling effect that has driven major new solar installations close to zero.

Solar panel installers and climate groups cried foul and insisted the Biden administration step in, thrusting Commerce Secretary Gina Raimondo — whose job is to help drive U.S. economic growth — into the uncomfortable position of overseeing a probe that critics said was crippling the solar industry. For weeks, Raimondo insisted she couldn’t interfere.

“My hands are very tied here,” Raimondo told Congress at a budget hearing in April.

An administration official familiar with Raimondo’s involvement said that internally, Raimondo never pushed for the investigation or directed it but that she had taken steps to enforce the statute Congress had passed. Throughout that period, Raimondo’s public comments remained focused on the administration’s clean energy goals and growing the U.S. solar industry, the official said.

Biden’s move Monday effectively takes the issue off the table for two years by ensuring no new solar tariffs on the Southeast Asian countries regardless of what the investigation determines. Assistant Commerce Secretary Lisa Wang said that if the investigation finds new tariffs are in order, they’d kick in after the two-year period.

Mamun Rashid, the CEO of Auxin, blasted Biden for “significantly interfering” in the investigation and questioned whether the president had acted illegally.

“He has opened the door wide for Chinese-funded special interests to defeat the fair application of U.S. trade law,” Rashid said.

“I remain committed to upholding our trade laws and ensuring American workers have a chance to compete on a level playing field,” she said.

Sen. Sherrod Brown, D-Ohio, a staunch advocate for U.S. manufacturing and workers’ rights, had pressed the Biden administration not to let politics get in the way of carrying the investigation forward.

“If undue political influence on this case is allowed to prevail, it would lead to more risks and vulnerabilities tomorrow” by signaling that U.S. trade laws “can be undermined through aggressive political lobbying,” Brown and four other Democratic lawmakers wrote to Biden last month.

On Monday, Brown avoided criticizing Biden’s move but said the fact that the vast majority of solar panels are still imported “has to change.”

“We have not invested in building up American capacity the way we should, and we have not addressed China’s repeated cheating,” Brown said in a statement. “On all these decisions, American solar manufacturers and their workers must be at the table.”