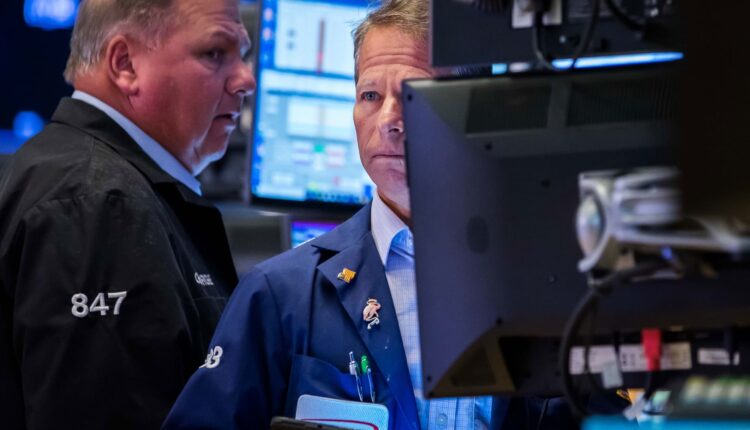 This is the daily notebook of Mike Santoli, CNBC’s senior markets commentator, with ideas about trends, stocks and market statistics. A market only partially braced for another uncomfortably hot inflation release undergoes a virtual test of the recent support zone. The result of the 6% annualized core and 8.6% headline consumer price index print is that an already narrow and bumpier path to an economic soft landing has come to seem that much more constricted and treacherous. Federal Reserve rate-hike expectations are getting swiftly repriced higher, the two-year Treasury above 3% and the yield curve flattening, capturing both likely Fed aggressiveness and risks to growth. It’s hard to escape the sense that the summer will be long and choppy at best, with months of friendlier inflation data needed to clarify the “peak inflation” idea, which remains plausible but not persuasive. Most of the one-off factors within core inflation (a rapid rent spike, airfares, even apparel) could arguably moderate soon, and durable goods aside from cars are disinflating. But this is not a market to trade on nuances with the Fed effectively solely focused on inflation. With all this, is it significant to see the S & P 500 drop straight to the area of its closing low print from three weeks ago and about 2% above the intraday trough? We did see a good deal of heavy buying at/under 3,900 on that relief bounce, a technical cushion now being tested. They call them retests because sometimes they’re passed and sometimes they’re failed. University of Michigan consumer sentiment crashing to fresh lows is also almost solely an inflation story, along with the undertow of broad societal unease that’s been in place a while. The silver lining: Any time consumer sentiment has hit a new low and started to recover, stocks have done very well the following 12 months. But of course, sentiment hasn’t yet bottomed and reversed higher. The Bank of America Bull-Bear Indicator also remains depressed and on a buy signal, though note that in prior prolonged bear markets this gauge has stayed pinned to the floor as stocks ground lower. Not saying we’re back in such a regime, but we need to point out periods when the trend overtakes contrarian dynamics. Oil prices and natural gas are easing, registering the demand worries implied by the broader market reaction to CPI and potential Fed response. Could also be why stocks have been able to stabilize for a few hours after the initial drop. Barclays already has projected the Fed will hike by 0.75 percentage points next week, compared to consensus expectations of half a point. The market’s implied forecast of the terminal fed funds rate essentially rose by one quarter-point hike, to just above 3.6%. This is all part of the process of the Street trying to catch up to and eventually over-extrapolate the tightening outlook. Would the market like a surprise 75-basis-point hike on Wednesday as a sign the Fed wants to “get it over with” sooner? Market breadth is quite weak, almost a 90% downside volume day on NYSE. Traders are again hunting for more “extreme extremes” to suggest a washout or a return to the old index lows with less selling intensity and fewer individual stocks making new lows – which would qualify as a possible positive divergence, implying selling pressure was drying up. Credit is showing a bit of stress (corporate spreads and weaker sovereign issuers in Europe), just a further restraint on risk appetite. VIX up 2.5 points but still under 29. The steadiness if the grind lower and heavy hedging/liquidation that’s already taken place are keeping VIX from surging toward range highs above 30. It’s an implicit 30-day forecast of market volatility, and over the next 30 days we’ll enter deepest summer and traverse the July 4 holiday weekend. Tough to bet the market stays wild, so statistically the muted VIX response makes some sense.