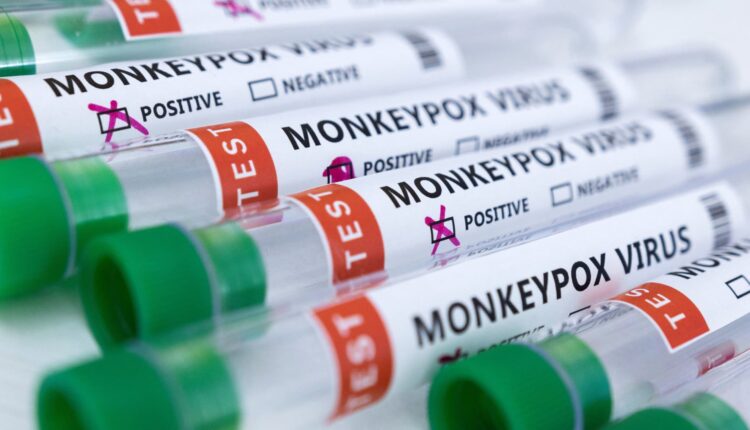 Test tubes labelled “Monkeypox virus positive and negative” are seen in this illustration taken May 23, 2022.

The Biden administration has distributed 1,200 monkeypox vaccine doses for people who have had high-risk exposures to the virus, part of a nationwide public health response to stamp out the disease before it causes a major outbreak.

U.S. health officials, worried the virus is spreading faster than previously thought, have said the global outbreak of monkeypox is the largest ever. The World Health Organization said Wednesday that there are now more than 550 cases across 30 countries. In the U.S., at least 20 confirmed or suspected cases have been reported in 11 states, including California, Colorado, Florida, Georgia, Illinois, Massachusetts, New York, Pennsylvania, Virginia, Utah and Washington state, according to the Centers for Disease Control and Prevention.

“A monkeypox outbreak of this scale and scope across the world, it has not been seen before,” Dr. Raj Panjabi, who leads the White House pandemic preparedness office, told reporters on a call last week.

However, CDC officials have sought to reassure the public that the arrival of monkeypox in the U.S. is vastly different from Covid-19, which blindsided the country two years ago. Scientists knew little about Covid when it first emerged and the U.S. had no vaccines or antiviral treatments to fight the virus in 2020.

Monkeypox, on the other hand, has been known to scientists since 1958 when the virus was first identified during outbreaks among monkeys kept for research purposes, and its transmission in humans has been studied since the 1970s. Global health authorities also have extensive experience successfully fighting smallpox, which the World Health Organization declared eradicated in 1980 after a successful global vaccination effort. Monkeypox is in the same virus family as smallpox though it is much milder.

CDC Director Dr. Rochelle Walensky told reporters last week that the U.S. has been preparing for an outbreak from a virus like monkeypox for decades. The U.S. has millions of vaccine doses in the strategic national stockpile that protect against monkeypox and smallpox as well as antiviral pills to treat the diseases.

Dawn O’Connell, who leads the Health and Human Services office responsible for the strategic national stockpile, said on Friday that the U.S. has enough vaccine on hand to manage the current monkeypox outbreak. However, O’Connell would not disclose how many shots the U.S. has at the ready.

The U.S. has two vaccines but the preferred option is in shorter supply. Jynneos is a two-dose vaccine approved by the FDA in 2019 to prevent monkeypox in people ages 18 and older. The CDC generally recommends Jynneos over the other option, ACAM2000, which is an older generation smallpox vaccine that can have serious side effects.

Last week, CDC official Dr. Jennifer McQuiston said the U.S. has 1,000 doses of Jynneos available. However, the Danish biotech company that makes the shots, Bavarian Nordic, said the U.S. actually has a supply of more than 1 million Jynneos frozen doses stored in the U.S. and Denmark under an order placed in April 2020. The shots have a shelf life of three years.

The U.S. government also has a stockpile of more than 100 million doses of ACAM2000, made by Emergent BioSolutions, McQuiston told reporters last week. The U.S. had released 500 doses of Jynneos and 200 doses of ACAM2000 as of Tuesday, according to the CDC. The U.S. has also sent out 100 courses of the oral antiviral tecovirimat to the states, health officials said Friday.

“We want to ensure that people with high risk exposures have rapid access to vaccines and if they become sick, can receive appropriate treatment,” Panjabi said on a call with reporters Friday. Jynneos and ACAM2000 can be administered before or after exposure to the virus. However, patients need to receive the vaccines within 4 days of exposure to prevent disease onset.

ACAM2000 has demonstrated high levels of protection against monkeypox in animal models and is expected to provide 85% protection against disease from the virus similar to earlier versions of smallpox vaccines, according to Mike Slifka, an immunologist at Oregon Health and Science University who has studied monkeypox. Less is known about Jynneos because the vaccine is newer but it produced reasonable antibody levels in humans and should protect against severe disease, Slifka said.

The CDC generally recommends Jynneos over ACAM2000 because it is considered safer. ACAM2000 can have serious side effects, and distributing the vaccine widely would require serious discussion, McQuiston said in a call with reporters last week. ACAM2000 uses a mild virus strain in the same family as monkeypox and smallpox that can still replicate, which means there’s a risk that the live virus in the vaccine can spread in the human body or to other people.

ACAM2000 is administered with a two-pronged needle that is scratched into the upper arm and the virus then grows into a localized infection in the form of a blister. The patient can potentially spread the virus to other people, or to other parts of their body if they scratch the blister and then rub their eye for example, which can result in vision damage. The FDA warns that it’s very important for people vaccinated with ACAM2000 to take proper care of the vaccination site so they don’t spread the virus to other people or other parts of the body.

The Jynneos vaccine, on the other hand, is not associated with these risks because it uses a virus strain that is no longer able to replicate in humans, according to Slifka. It is also administered with a normal syringe like other common shots such as the flu vaccine.

Given the potential side effects of ACAM2000, the vaccine would likely only see wide use in the context of a major smallpox epidemic because that virus is so deadly, according to Dr. Peter Hotez, an infectious disease and vaccine expert at Baylor College of Medicine in Texas. Monkeypox, on the other hand, is a much milder virus and no deaths have been reported in the recent cases in Europe and North America.

“We’re very lucky that the outbreak right is the low virulence West African strain,” said Dr. Rachel Roper, a professor of microbiology and immunology at East Carolina University who has studied monkeypox.

Though the U.S. has far more tools and more knowledge to fight monkeypox than it had against Covid in 2020, there are still many unknowns about the current outbreak. It’s unclear why the virus is now spreading in countries outside West and Central Africa where virus is endemic. Historically, the virus spread in small villages in Africa by jumping from rodents that carry the virus to humans with very little transmission between people, Slifka said. However, the virus now appears to be spreading better between people, he said.

“Through intimate contact and skin-to-skin transmission, it’s transmitting better than it has under other circumstances,” Slifka said.

Most monkeypox patients in the U.S. travelled internationally in the 21 days before symptom onset which suggests they picked up the virus outside the country, according to McQuiston. The CDC doesn’t believe monkeypox is spreading widely in the U.S right now but is closely monitoring the situation. The U.S. has conducted 120 tests so far for orthopoxvirus, the family that includes monkeypox.

“There could be community level transmission that is happening, and that’s why we want to really increase our surveillance efforts,” McQuiston told reporters during a call on Friday. “We want to really encourage physicians that if they see a rash and they’re concerned it might be monkeypox to go ahead and test for that,” she said.

WHO officials said on Wednesday that the sudden appearance of monkeypox in multiple countries in North America and Europe indicates that the virus has probably been spreading outside West and Central Africa undetected for some time, though it is unclear for how long. Dr. Rosamund Lewis, the WHO’s technical lead for monkeypox, said the virus may be spreading more now because immunity in the human population has waned since smallpox vaccination was halted after the disease was eradicated.

Lewis said the WHO is not recommending mass vaccination against monkeypox because the current outbreak can still be contained. Most of the cases so far have been reported among men who have sex with men, developed symptoms and sought care at sexual health clinics, according to the WHO. Lewis said it is important to provide gay and bisexual men with the information they need to protect themselves from the virus and prevent it from spreading.

The CDC has told people with confirmed or suspected monkeypox infections to isolate at home until local or state health departments say otherwise. People with confirmed infections should remain in isolation until the skin lesions that characterize the disease have completely resolved, the scabs have fallen off and a new layer of skin has formed.

Monkeypox typically starts with symptoms similar to the flu including fever, headache, muscle aches, chills, exhaustion and swollen lymph nodes. Lesions then form on the body, and the virus spreads primarily through skin-to-skin contact with these lesions. Monkeypox can spread through respiratory droplets if a person has lesions in their throat or mouth, but it does not transmit easily this way.

People exposed to monkeypox should monitor for symptoms for 21 days, according to the CDC. They should check their temperature twice daily and monitor for chills, swollen lymph nodes and new skin rashes. If a fever or rash develops, the person should self isolate and contact the local health department immediately.