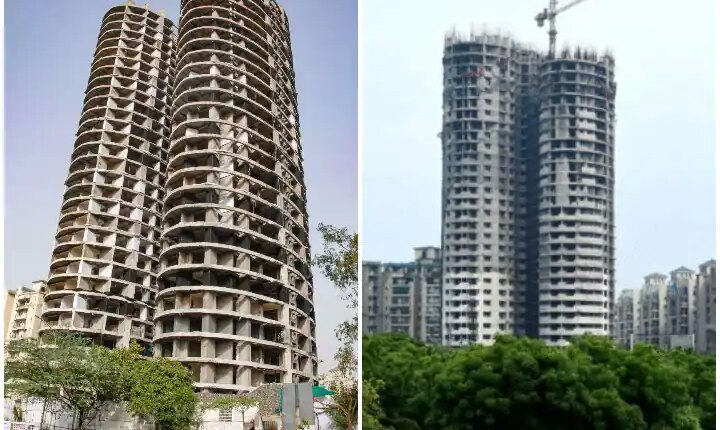 Supertech Twin Tower: Realty developer Supertech’s demolition work on the twin towers in the Emerald Court complex in Noida has intensified. According to the Noida Authority, the residential towers of Supertech Apex and Cyan will be demolished on August 21. In the meeting of the New Okhla Industrial Development Authority on Tuesday, a complete plan has been prepared for the demolition of this building.

Earlier, as per the orders of the Supreme Court, orders were given to demolish the twin towers built in the Emerald Court premises of Supertech by May 22. After which the builder and the agency had sought additional time from the Supreme Court to complete the preparations for its demolition. After which, on May 17, the Supreme Court, giving 3 months’ time, ordered these towers to be demolished by August 28, 2022.

More than 3 thousand kg of gunpowder will be used

At present, the demolition work of the building is going on in full swing. In which the work is now being done to drill holes to put gunpowder to bring down the towers by blast. About 3400 kg of gunpowder is being feared to land the building. At the same time, holes are being made at a total of 10 thousand places in the building.

Will also keep an eye on pollution control

The Noida Authority has held a meeting with all the stakeholders on Tuesday to finalize the process of demolition of the Twin Towers. The authority says that it will be audited before the buildings are demolished and by June 30, a report will be submitted by Edifice Engineering to CBRI.

The authority has also said that the company will also prepare a plan and submit it to the UP Pollution Control Board, which will mention the process of disposal of waste after the demolition of the twin towers. Let us inform that Edphis Engineering has insured Rs 100 crore to cover any damage caused due to demolition of buildings. There are a total of 915 apartments and 21 shops in both the buildings.