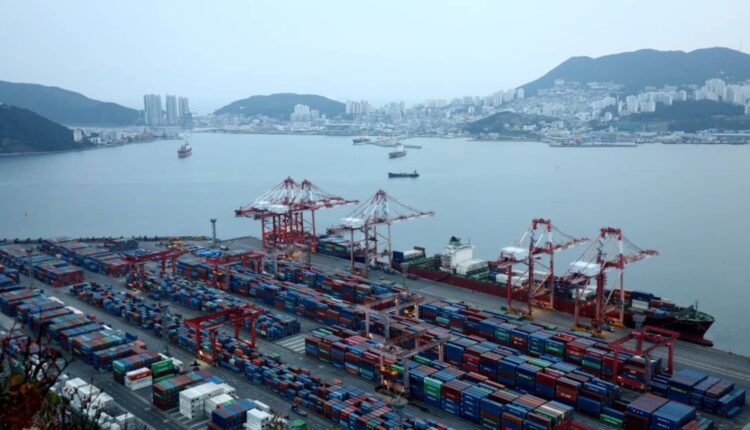 A general view of the Busan Port on November 05, 2021 in Busan, South Korea. South Korean truckers embarked on broader and more aggressive strike action on Friday, threatening to severely curtail shipments of raw materials for semiconductors and petrochemical products.

That comes on top of action at steelmaking giant POSCO and automakers Hyundai Motor and Kia.

The strike led to a halving of production at Hyundai Motor’s biggest factory complex in the industrial hub of Ulsan on Thursday. Some 1,000 truckers were protesting in front of the complex on Friday, a Reuters witness said.

“There are some disruptions to our production due to the truckers strike, and we hope production would be normalized as soon as possible,” a Hyundai spokesperson said.

Hyundai normally makes about 6,000 vehicles a day at its plants in Ulsan, including the high-margin Genesis SUV and Ioniq 5 electric vehicle.

Entering its fourth day, the strike has disrupted shipments for a wide range of companies and is slowing activity at ports. The movement of containers at Ulsan port, which accounts for about 10% of South Korea’s port traffic, has been suspended since June 7, a government official said.

About 7,500 members, or about 35% of the Cargo Truckers Solidarity union in the country, are expected to go on strike on Friday, according to South Korea’s transport ministry. The government estimates that about 6% of the country’s 420,000 truck drivers belong to a union.

Kim Gyeong-dong, a trucker union official, said the union ran out of funds to finance the strike on Thursday and that it was unlikely that strike could last another 10 days.

The truckers plan to stop shipments of raw materials for semiconductors that are produced in Ulsan, Park Jeong-tae, a senior truckers union official, told Reuters on Friday.

Park added that the number of vehicles entering an Ulsan petrochemical complex has been cut to one tenth of normal levels and truckers would be telling non-union truckers not to enter the complex.

South Korean President Yoon Suk-yeol, in power for just a month, said on Friday that the government planned to take a neutral stance in the dispute.

Police said around 30 union members have been arrested so far and it will respond strictly to illegal acts at strike sites.

The truckers, regarded as self-employed contractors in South Korea, are seeking pay increases and a pledge that an emergency measure guaranteeing freight rates would be extended. The emergency measure was introduced during the pandemic and is due to expire in December.

The drivers also want freight rates to apply to a wider range of trucks, not just container trucks and cement trucks.

Things to consider before shaving your head with Head Shaver: