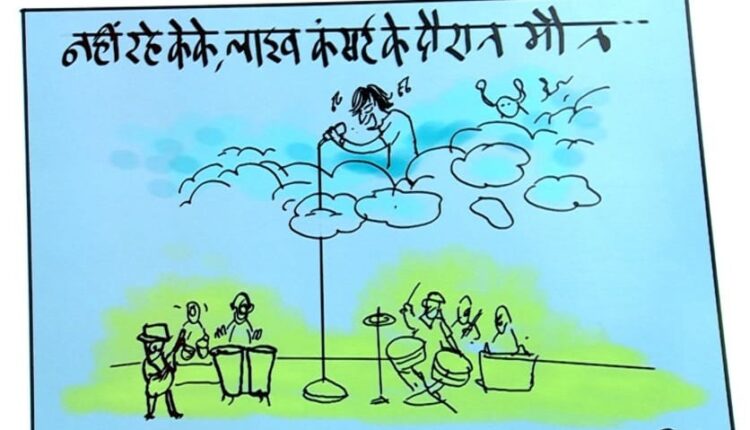 Bollywood’s famous singer KK passed away after a live concert in Kolkata. It was told that his health started deteriorating during this concert, shortly after which he fell in the hotel room and died. The cause of death is currently believed to be heart attack. On such death of Singer, cartoonist Irfan has remembered him through his cartoon.

Remembered like this through cartoons
Cartoonist Irrfan has shown KK’s live concert in his cartoon. But KK is not visible in that live concert. KK’s place is seen empty on the stage. Instead of the stage, he is shown singing with a mike amidst the clouds. That is, KK is now away from his fans. Which the cartoonist has shown well in this art. He has written over this cartoon – KK is no more, death during live concert…

Let us inform that on Tuesday 31 May, KK had a live concert in Kolkata, West Bengal. Thousands of his fans had reached for this live concert. After reaching here, KK forced everyone to dance to his songs. But after that KK’s health started deteriorating. First he was taken to the hotel, where he fell on the floor. He died shortly after that. The doctors declared him brought dead after examining him. After the death of this famous singer, all the celebrities of the country including PM Modi remembered him.

Singer KK Passes Away: Due to the death of KK, there is a shadow of mourning among the fans, people said ‘his voice will always be alive in the mind…’