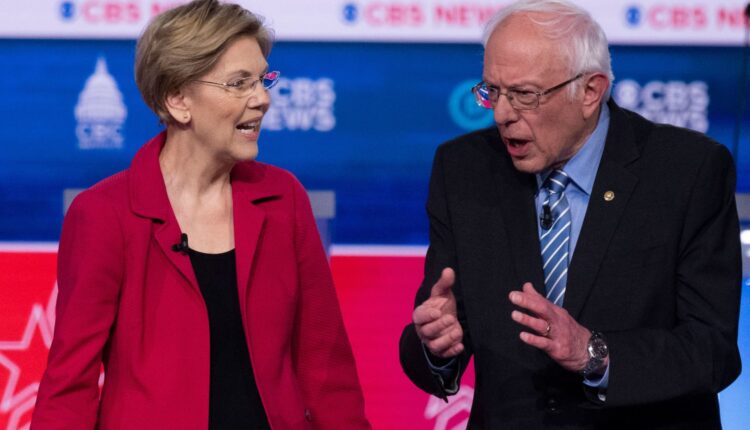 The proposal, called the Social Security Expansion Act, would expand benefits for current and new beneficiaries by $200 per month, or $2,400 per year, and would make the monthly checks more generous in other ways.

To do that, and improve the program’s solvency at the same time, the plan also calls for raising taxes on high-earning households.

Sanders and Warren, who are co-chairs of the Expand Social Security Caucus, were joined by Democrats including Sens. Cory Booker of New Jersey, Kirsten Gillibrand of New York, Jeff Merkley of Oregon, Alex Padilla of California, Chris Van Hollen of Maryland and Sheldon Whitehouse of Rhode Island, along with Rep. Peter DeFazio, an Oregon Democrat who introduced companion legislation in the House.

More from Personal Finance:
Social Security cost-of-living adjustment in 2023 may be a record
Supplemental Security Income bill may be step toward broader reform
Here are the changes Americans are willing to make to fix Social Security

Social Security payroll taxes are applied at a rate of 6.2% for both the employer and employee, for a total of 12.4%, which is deducted from paychecks.

The bill calls for having the wealthy pay more through a 12.4% tax on investment and business income. It would also apply levies to certain business income that is not currently subject to payroll taxes.

“Today, absurdly and unfairly, there is a cap on income subject to Social Security taxes,” Sanders said in prepared remarks during a Thursday Senate hearing.

Under the terms of the bill, more than 93% of households would not see their taxes go up.

At the same time, it would extend the program’s solvency past 2096.

New projections from the Social Security trustees show the program’s combined funds will only be able to pay full benefits until 2035, at which point 80% of benefits will be payable.

Raising taxes on the wealthy in order to shore up the program is popular among voters, according to a survey released this week by the University of Maryland’s Program for Public Consultation.

How the bill would increase benefits

The proposal also calls for boosting benefits in several ways.

It would, for example, increase minimum benefits to 125% of the poverty line and index them. That would amount to about $17,000 for a single worker who has worked for their entire career, according to the proposal.

It also aims to make annual cost-of-living adjustments more generous by changing the measurement by which they are calculated to the consumer price index for the elderly, or CPI-E, which some advocates argue better reflects retiree spending.

The legislation would also restore benefits for students up to age 22 if they are attending college or vocational schools and are the children of disabled or deceased workers. That would reverse a 1983 policy that eliminated benefits for those people.

The effects of the plan has been analyzed by the Office of the Chief Actuary at the Social Security Administration.

“We estimate that enactment of these provisions would extend the ability of the OASDI (Old Age, Survivors, and Disability Insurance) program to pay scheduled benefits in full and on time throughout the 75-year projection period,” said Stephen Goss, chief actuary at the Social Security Administration, in a statement.

However, Republican leaders were quick to take issue with the plan, particularly the proposed tax increases, at the Senate hearing on Thursday.

“This bill has no chance whatsoever of receiving a single Republican vote in either House,” said Sen. Mitt Romney, R-Utah. “So it will not be passed.”

Romney has proposed a bill called the TRUST Act, which would create bipartisan committees that would work to identify potential ways to shore up ailing federal programs including the Social Security, Medicare and the highway trust funds.