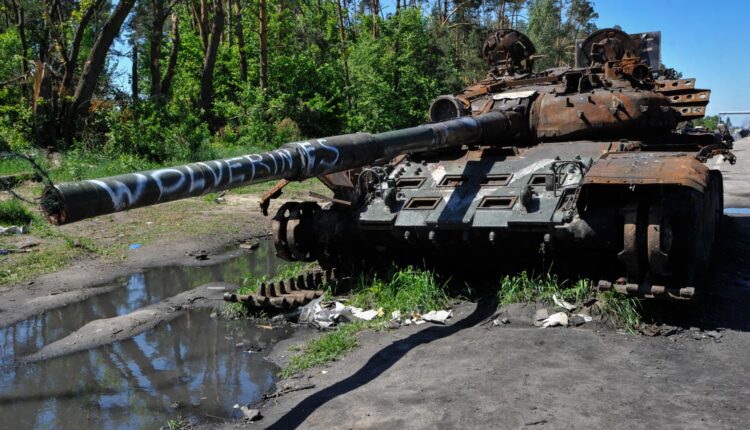 A destroyed Russian tank about 25 miles west of Kyiv. Russia failed in achieving its key tactical objectives in the first 100 days of the Ukraine war, according to a former U.S. diplomat.

Russia has failed to achieve its strategic goals in the first hundred days of the war and Ukraine need not cede substantial territory to end it, William Courtney, adjunct senior fellow at Rand Corporation, told CNBC’s “Capital Connection” on Monday.

Russia began its invasion of Ukraine on Feb. 24, calling it a “special military operation.” The war entered its 100th day on Friday.

“Over 100 days, the Russians have pulled back their aims at least tactically, perhaps not strategically, quite a lot. The original goal was to seize three major cities: Kyiv, Kharkiv and Odessa. Russian troops had to withdraw from Kyiv and Kharkiv. And [they] have not been able to get close to Odessa,” said Courtney, who also served as U.S. ambassador to Georgia and Kazakhstan.

Courtney said there’s a chance that the war could lead to Russian President Vladimir Putin’s ouster from office. “There could be regime change in Russia. The intense pressure that Western sanctions are beginning to put on the Russian economy combined with battlefield setbacks could cause … popular unrest, elite infighting,” he said.

Noting that these “setbacks” on the battlefield are embarrassing for Russia, Courtney said the Ukrainians had even been able to retake some parts of Donetsk in eastern Ukraine despite Russia amassing its forces in that area.

“So (failure to achieve) these major goals really is quite embarrassing for Russia. Right now the Russians are concentrating their forces in Donetsk but what’s interesting is that Ukrainian forces have been able to retake some parts of Donetsk in the last couple of days,” he said, adding that this suggests Russia may not be able to field a larger force.

Former U.S. Secretary of State Henry Kissinger, speaking at the World Economic Forum on May 23, called for a diplomatic solution to end the war, including potential concessions of territory by Ukraine. Ukraine, however, firmly rejected the idea. And French President Emmanuel Macron recently said Russia should not be “humiliated.”

But Courtney takes a different view, dismissing the need for a “face-saving solution” for Russia to end the war. Referring to historical events, he said the Soviet Union had not needed to be appeased to withdraw from Afghanistan in 1989 or for the Cuban missile crisis to end.

“It will [not] be necessary for Ukraine to make substantial territorial concessions to achieve a peace,” Courtney said, adding that there is strong support for Ukraine in Western nations. “This has become a proxy war. It’s not just Russia’s war against Ukraine. It’s really a Russian war against the West,” he added.

The battlefield is still fluid. The end result will depend very much on where troops are when the fighting stops.

He said it is “too soon” to tell which side is winning. “The battlefield is still fluid. The end result will depend very much on where troops are when the fighting stops,” he said, adding that the Russians still occupy “a fair amount of territory” between western Russia and Crimea.