Russia and Ukraine battle over underwater mines in the Black Sea 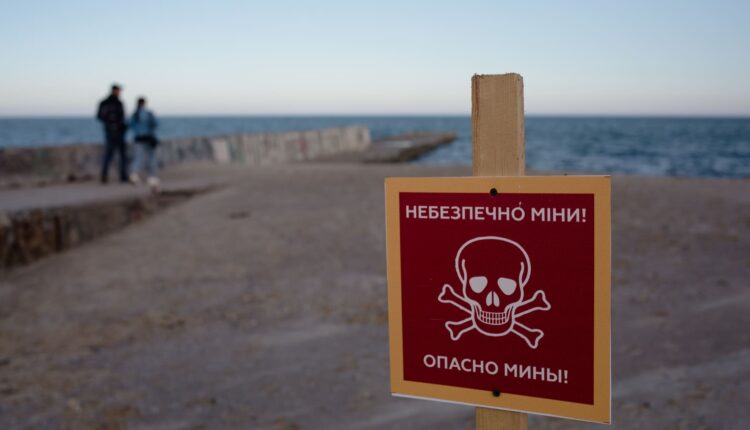 Turkish Navy’s Aydin class mine hunting vessel TCG Akcay sails in the Bosphorus on its way to the Black Sea in Istanbul, Turkey March 26, 2022.

The world is facing a global food crisis as a result of the war in Ukraine, with soaring prices being felt around the world as a result of Russia’s invasion — and naval mines are a big part of the problem.

Russia and Ukraine are trading increasingly frequent barbs over the mines in the Black Sea, which are being used by Russia to its political advantage as its blockade of Ukraine’s ports continues.

“The biggest impediment to the grain exports is clearly the Russian blockades, and that includes the mines,” Maximilian Hess, central Asia fellow at the Foreign Policy Research Institute, told CNBC Thursday.

“The real issue going forward is that Russia seems intent on using this as an instrument of leverage.”

Russia and Ukraine accuse each other of using the mines to disrupt shipping and prevent grain exports from being able to leave the country, a factor that has contributed to global food prices rising.

Ukraine has even accused Russia of setting Soviet-era naval mines adrift in order to purposefully disrupt shipping and global food supplies, saying that such mines were effectively “uncontrolled drifting ammunition.”

Russia denies this and has, in turn, blamed Ukraine for the un-moored mines. Moscow has also blamed the international sanctions imposed on the country for the global food crisis, and said that exports can restart as soon as Ukraine removes the mines from its ports.

Ukraine has refused to do that, saying it will allow Russia to attack more of its coastline. Odesa, its last main functioning port (and a mined one at that) further westward along the Black Sea coast, is particularly vulnerable.

A sign reads “Caution: mines” on the beach in Odessa, Ukraine, in April 2022.

William Alberque, director of strategy, technology and arms control at the International Institute for Strategic Studies, told CNBC that Ukraine would have been “crazy” not to have mined the approaches to its ports and that its reluctance to remove them now was rational.

“You can completely understand why Ukraine would be using sea mines right now. The chance of amphibious assault on Odesa has been something explicitly made by the Russians,” he said Thursday.

But strategists agree that Russia is now using the mines to its economic and military advantage.

“The mines are a real barrier to grain exports from Ukraine … and they’re a big problem,” Sidharth Kaushal, a naval power expert with the Royal United Services Institute think tank, told CNBC Thursday, noting that Russia had been strategic about the mines.

“It is certainly an excuse for the Russians that they’re there because they can selectively de-mine ports they control, try to reroute trade, and maintain a de facto blockade over Odesa whilst claiming that this is all on the Ukrainians.”

Ukraine does not deny mining its own ports in order to protect them from an amphibious attack by Russia, given that one of its key war objectives is to gain control of Ukraine’s ports along the Black Sea coast. These include Odesa and those along the Sea of Azov, like Mariupol, which Russia seized after a dogged, aggressive siege.

During a high-profile visit to Turkey this week (which, like Ukraine and Russia, also encircles the Black Sea), Russia’s Foreign Minister Sergey Lavrov suggested that if Ukraine de-mined its ports, grain exports would be able to resume.

He also claimed that Russia would guarantee the safety of Ukrainian ships leaving the ports, and would not use the situation — essentially a de-mined, undefended southern Ukrainian coast — to its advantage.

“These are guarantees from the president of Russia,” Lavrov said following talks with his Turkish counterpart Mevlut Cavusoglu.

A dockyard worker watches as barley grain is mechanically poured into a 40,000 ton ship at a Ukrainian agricultural exporter’s shipment terminal in the southern Ukrainian city of Nikolaev July 9, 2013.

Ukraine has been understandably cynical about Russia’s offer, with Foreign Minister Dmytro Kuleba saying that any assurances from Russian President Vladimir Putin — who repeatedly said Russia had no plans to invade Ukraine in the months leading up to the Feb. 24 invasion — were hollow.

In the meantime, the United Nations continues to warn about the ripple effects of the war in Ukraine, which it says has generated a severe cost-of-living crisis and impacted food security, energy, and financing.

The organization estimates that around 1.6 billion people in 94 countries are exposed to at least one dimension of the crisis, with around 1.2 billion living in “perfect-storm” countries severely vulnerable to all three factors.

“The impact of the war in Ukraine on food security, energy and finance is systemic, severe and speeding up,” Antonio Guterres, the UN’s secretary-general, said Wednesday.

We must act now, he added, “to save lives and livelihoods over the next months and years.”

Things to consider before shaving your head with Head Shaver: