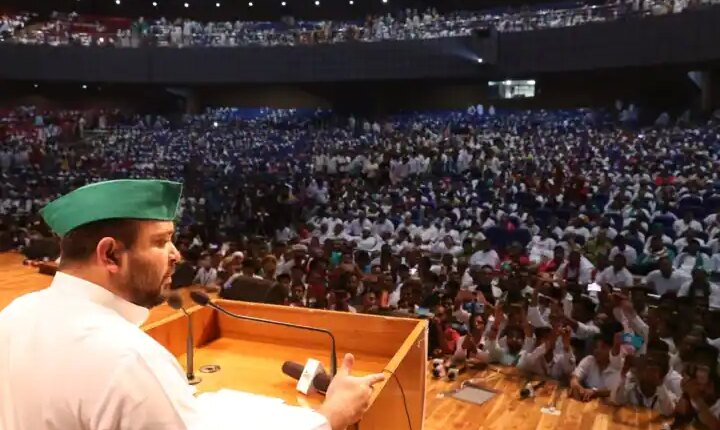 Bihar Tejashwi Yadav Report Card: Tejashwi Yadav, Leader of the Opposition in the Bihar Legislative Assembly, targeted Bihar and the central government fiercely on Sunday. He said that the three chiefs of the army are Hindus, the President, PM Modi is a Hindu, no CM is a Muslim, then how does the BJP say that the Hindu is in danger. His chair is in danger that’s why BJP is talking like this. He said that BJP MLAs in Bihar Assembly were saying that voting rights of Muslims should be taken away. CM Nitish Kumar was silent then. No one can take away the voting rights of Muslims in the presence of us.

Let us inform that, on the occasion of Sampoorna Kranti Diwas, a representative conference was organized on behalf of the Grand Alliance in Bapu Auditorium. The leaders of RJD, Left parties were present on this occasion. The alliance of RJD and Congress was broken in the recent assembly by-elections in Bihar. There was no one from Congress in today’s program. Congress is out of the Grand Alliance. Tejashwi Yadav from RJD, State President Jagdanand Singh, Abdul Bari Siddiqui, Shivanand Tiwari and other prominent leaders, all party MLAs, MLCs, workers were present.

Tejashwi said – will not kneel in front of communal forces

Tejashwi said that we will never kneel in front of communal forces. In the 2020 assembly elections, the people had won the Grand Alliance. BJP-JDU formed the government from Chor Darwaza. We were defeated in many seats. There is a government of double not trouble engine in Bihar. Unemployment is at its peak in Bihar. Education, health, law and order are in ruins. Bihar did not get special status. Bihar is laggy in every field in the report of NITI Aayog. Tejashwi said that no system is working in Bihar. Sessions in universities are 3-4 years late.

The misuse of investigative agencies in the country

The Leader of Opposition said that the investigating agencies are being misused in the country. Raids are being conducted at our people’s place. Lalu ji has clearly said that he will not be afraid. Tejashwi said that the government in Bihar runs from Nagpur. Nitish is in CM’s chair. But the possession belongs to BJP. CM Nitish Kumar is sitting in the lap of RSS. Nitish Kumar is under pressure from BJP. We will move forward on the issue of education-earning-medicine. There is no talk of poverty. We want to end poverty. Want to double the income of farmers. The opposition is not united in the country. We have to unite for the benefit of the poor.

He said that from Bihar to the central government will have to be surrounded. When we created pressure, Nitish Kumar decided to conduct caste census. If I or my family had to advance myself and mean to power, I would have been the Chief Minister and the RJD would have an alliance with the BJP. But we are not like that. We are not concerned with power, we want public interest. For power, Nitish Kumar is bowing down to communal forces like BJP. Neither Bihar could get special status nor special package.

On the other hand, RJD chief Lalu Yadav said that dictatorship is at its peak in the country. Brotherhood, unity is ending in the country. There could be a civil war in the country. We will fight together against inflation, corruption, unemployment. Let us tell you that Lalu Yadav did not come to the program due to being unwell. A video of him was shown in the program. He made his point through video.

D Raja said about being united

At the same time, D Raja of Left party said in the program that we have to fight strongly with Bihar and the central government. There is unemployment in Bihar, people here are going for jobs in other states. Bihar government has failed on every front. Tejashwi Yadav is a young and energetic leader. Left parties stand firmly with him. There is a need to bring change in Bihar. Even the Modi government at the center is not working. In 2014, Modi had said that good days will come. But did not come. Modi had said that Sabka Saath, Sabka Vikas will follow the path of Sabka Vishwas. But this is not happening. Modi is benefitting his industrialist friends. BJP, RSS are spreading hatred in the society, they need to be uprooted.

On the other hand, JDU’s Rajya Sabha MP and senior leader Vashisht Narayan Singh said that there is no merit in Tejashwi Yadav’s report card and his allegations. Neither is the truth. As Chief Minister Nitish Kumar is running the government in the best way. Nitish set an example of how a coalition government is run. Bihar is making progress in every field. He said that Congress was not present in the convention of the Grand Alliance today. The Grand Alliance itself is not united. Nitish also takes allies and opposition parties along.

He said that coalition parties and opposition parties were also present in the meeting he called regarding caste census and it was unanimously decided that caste census would be held. This is the specialty of Nitish’s leadership. Nitish is not working under the pressure of BJP, nor is the government running from Nagpur. Nitish works in his own way. He said that Tejashwi Yadav tweets and gives statements in the media. There can be no Leader of the Opposition from this. The leader is not playing the role of the opposition properly. If they raise issues of public interest, they should remain in the midst of the public. But the happiness of the people never lives in misery. Whenever there is any problem in Bihar like flood, corona, Chamki fever etc., they stay outside.

At the same time, Bihar BJP spokesperson Prem Ranjan Patel also retaliated on Tejashwi and Lalu Yadav. He said that Tejashwi Yadav should not see the President, the Prime Minister, the chiefs of the three forces with any particular religion to shine his power. Hindus in the country are in danger because you and leaders like you are doing politics of appeasement to get power. They are adopting all means to please a particular section. Lalu Yadav is saying that there can be a civil war in the country. During his reign, the extent of cruelty had reached, then was there no civil war? The people of the country like development. The country is progressing rapidly.