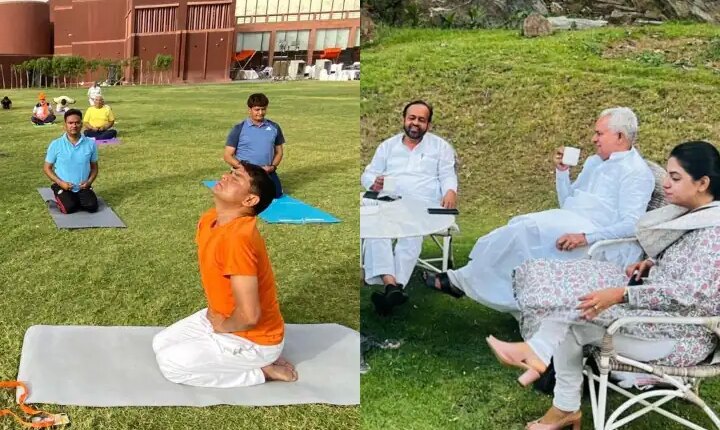 Rajasthan Rajya Sabha Election: The elections going to be held for the four seats of the Rajya Sabha of Rajasthan are proving to be very expensive and very heavy on the general public of the state. Both the ruling Congress and the BJP are resorting to barricades in the name of keeping the MLAs safe from trading and sabotage. Bada captive is also such which is not only breaking records but crores of rupees are also being wasted like water.

The Congress government of Rajasthan has to win all its three candidates for the Rajya Sabha and its Rajasthan Congress government has accommodated more than a hundred MLAs at the Taj Aravali Hotel in Udaipur for the last one week. More than a hundred rooms in this hotel have been booked for politicians. Here, the means of leisure and entertainment from all over the world are also available for the legislators. The MLAs have been enjoying films including sports, yoga, magic tricks since a week. Do you know how much money is being spent on these MLAs in a day?

How much money is Rajasthan Congress spending on MLAs

It is being told that about 25 lakh rupees are being spent daily for more than 100 rooms booked for MLAs and for the day’s food and drink. That is, the expenditure of eight days will be around Rs 2 crore. This is just the hotel count. Boeing aircraft were called to bring the MLAs from Udaipur to Jaipur on Thursday evening, which costs about 40 lakh rupees. Apart from this, small charter aircraft are also being used to transport MLAs and CM Ashok Gehlot to and from Jaipur and Udaipur. One round of this small plane is about 15 lakh rupees. Between June 4 and 5, this plane has made about three or four rounds. CM Gehlot has once brought six MLAs and once three MLAs to Udaipur by a small plane. Altogether one crore rupees have been spent on the small aircraft so far. When did there be a big ban in the Gehlot government?

Now from Thursday, all Congress MLAs will be guests of Hotel Leela Palace in Jaipur. More than a hundred rooms have been booked here too. The rent of a room for a day is about 15 thousand rupees. The cost of this hotel for a day is coming close to 1.5 crores. This is the third barricade of MLAs in the three-and-a-half year rule of the Congress government so far. Earlier, all the Congress MLAs had been in barricade for nine days from June 11 to 19 in the year 2020. After this, when there was a political crisis on the Gehlot government, the Congress MLAs were kept in Jaisalmer hotel for a total of 34 days from 13 July to 14 August 2021. Now for the Rajya Sabha elections, Congress MLAs will be kept in Udaipur from June 2 to June 9 and Hotel Leela in Jaipur on June 9-10. In this way, the Congress MLAs have to spend 53 days in the barricade till now in the entire tenure of their government. But in the barricade, the BJP MLAs have been read to be a little less than the Congress MLAs. BJP is doing barricades for the second time. All the MLAs of the party have been staying at the Taj Hotel Devi Ratan in Jamdoli area of ​​Jaipur for the last four days.

How much is BJP spending on MLAs as compared to Congress

BJP has booked a total of 55 rooms in Devi Ratan Hotel. Here a day’s rent for a room is about 25000 rupees. In this way, the cost of a hotel for five days will be about 70 lakh rupees. Earlier, during the Rajya Sabha elections of the year 2020, BJP had made its MLAs stay in a hotel in Jaipur for about four days. In this way, the BJP has done a nine-day barricade so far.

The special thing is that till now the MLAs of BJP and Congress have spent about fifteen hundred hours in the barricade. Whereas in these three and a half years, a total of seven sessions of the Rajasthan Legislative Assembly have been held for 112 days. In terms of hours, this figure is made about eight hundred hours. That is, the time of fencing was almost twice as compared to the work done in the house. The biggest thing is that both the parties have burnt crores of people’s rupees so far on the barricade.