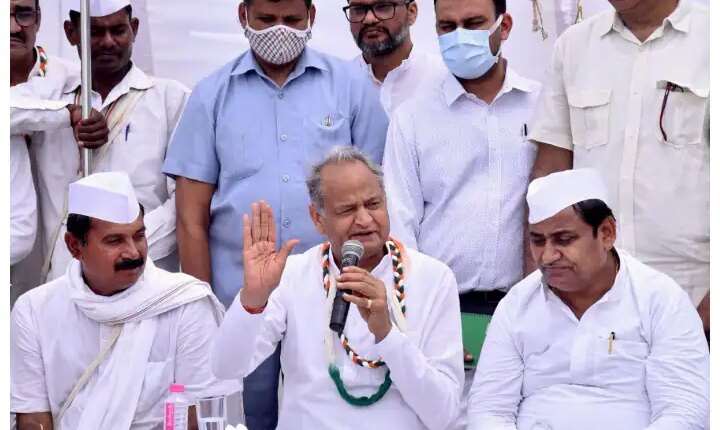 Rajya Sabha Election 2022 Congress To Shift MLAs To Udaipur: Political activities are gaining momentum as the date of election for four Rajya Sabha seats in Rajasthan nears. The ruling Congress in the state has decided to send itself and its supporting MLAs to Udaipur. At the same time, the Rajasthan unit of BSP has demanded that six MLAs who joined Congress after winning the elections on its ticket should be stopped from participating in these elections. A total of 5 candidates are now in the fray for the four seats of Rajya Sabha from the state, out of which three are from Congress, one from BJP and one is independent. Voting will be held on June 10.

Congress party sources said here on Wednesday that all the MLAs have been asked to reach Udaipur. Some MLAs are leaving for Udaipur today while some will leave on Thursday. Along with Congress, independents and other MLAs supporting the Congress government are also going to Udaipur. These MLAs will stay at the same hotel in Udaipur where the Congress’ Nav Sankalp Chintan Shivir was held last month. The Congress’s decision to keep its MLAs in one place before the Rajya Sabha comes a day after media businessman Subhash Chandra filed his nomination as an independent candidate.

Subhash Chandra is currently a member of Rajya Sabha from Haryana and his term is going to end on August 1. BJP is supporting him in this election. Congress has fielded Mukul Wasnik, Pramod Tiwari and Randeep Singh Surjewala while BJP has fielded former minister Ghanshyam Tiwari. Chief Minister Ashok Gehlot on Tuesday termed the BJP’s move to support independent candidate Subhash Chandra as a “game” and said the party wanted to indulge in horse-trading. According to the numbers, in the 200-seat assembly of Rajasthan, the Congress can comfortably win two seats with its 108 MLAs and the BJP one seat with 71 MLAs. After two seats, Congress will have 26 surplus and BJP will have 30 surplus votes.

A candidate needs 41 votes to win in Rajasthan. Leaders of the ruling Congress are hopeful that it will win the third seat with the support of MLAs of other parties and independents supporting the government. Gehlot and Congress candidates met 10 of the 13 independent MLAs from the state on Tuesday. On the other hand, countering Chief Minister Ashok Gehlot’s allegation of horse trading of MLAs on BJP, Deputy Leader of Opposition in Rajasthan Assembly Rajendra Rathod said on Wednesday that Gehlot himself is an expert in ‘Elephant Trading’. He said that Gehlot, while being the Chief Minister, brought Bahujan Samaj Party MLAs to the Congress twice.

BJP’s counterattack on the allegation of horse trading

Rathod said that Chief Minister Ashok Gehlot is talking of ‘horse trading’ by BJP. He not only swallowed the whole elephant trading in two times and is teaching us today. While being the Chief Minister, he has done the work of swallowing the entire BSP in Rajasthan by breaking the MLAs of Bahujan Samaj Party twice. Let us inform that all the six MLAs who won on BSP ticket had joined the Congress in 2019. Earlier in 2009, during Gehlot’s tenure, all BSP MLAs had joined the Congress. Rathod said that Chief Minister Gehlot has made a record of keeping the MLAs at one place. What are they afraid of?

What is the charge of BSP?

Here, the state unit of BSP has demanded the Governor and the Speaker to stop the six MLAs who joined the Congress from participating in the elections. BSP state president Bhagwan Singh Baba has written a letter to Governor Kalraj Mishra and Speaker CP Joshi, demanding that the six MLAs who joined the Congress be barred from participating in the elections.
The BSP said in the letter that in the 2018 assembly elections, six MLAs who won on the BSP’s symbol were unconstitutionally merged with the Congress party. He said that the case against all these MLAs is going on in the Supreme Court under the anti-defection law, which is going to be decided soon.

At the same time, in view of the Rajya Sabha Election 2022, Congress State President Govind Singh Dotasara said that 6 MLAs had merged with the Congress and now they are Congress MLAs. Six MLAs Rajendra Gudha, Lakhan Meena, Deepchand Kheria, Sandeep Yadav, Joginder Awana and Wajib Ali, who won the assembly elections on BSP tickets, joined the Congress in September 2019. At the same time, the nomination of Independent candidate Manoj Kumar Joshi for the Rajya Sabha has been rejected in the investigation on Wednesday. According to officials, the nomination has been rejected considering it incomplete. Now three candidates of Congress, one from BJP and one independent are in the fray for four seats. Candidates can withdraw their nominations till June 3 and if necessary, voting will be held on June 10.

Rajya Sabha Election: Which leaders angry over the distribution of Rajya Sabha ticket in Congress can say goodbye to the party? Learn