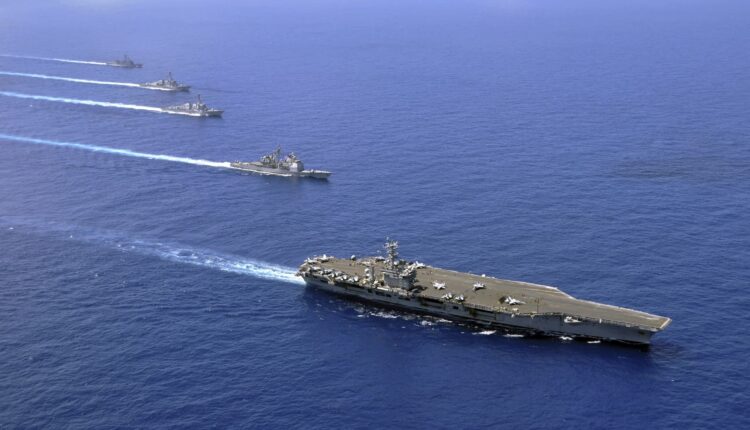 The Quad’s MDA program may further militarize the Indo-Pacific region, where U.S. aircraft carrier USS Nimitz is seen here in a file photo leading a formation.

The Quad countries want to jointly monitor movements of ships and submarines in the Indo-Pacific using satellites, a move analysts warn could potentially lead to militarization of the region.

“While the Quad as of now is not a security organization, it has the potential to quickly metamorphose into one,” retired Maj. Gen. Dhruv Katoch of the Indian Army told CNBC. “If Chinese belligerence threatens ASEAN countries, then perhaps Southeast Asian countries too would be inclined to join such a grouping.”

The initiative’s military nature is also underlined by the fact that the program is driven by the respective navies of the four participating countries — the U.S., Australia, Japan and India.

Already a scene of intensifying geopolitical tussle for influence between the U.S. and China, the Indo-Pacific region has seen “freedom of navigation” patrols by U.S., Australian, German, French and British naval ships in waters and maritime features claimed by China.

With the new Indo-Pacific Partnership for Maritime Domain Awareness program, announced at the Quad leaders’ summit in Tokyo in May, a new dimension to the state of vigilance will be added.

The IPMDA will share commercially available satellite data and alert smaller Southeast Asian states if there are territorial intrusions or if ships carry out illicit activity such as illegal fishing, smuggling or piracy in waters within their maritime boundaries.

“This initiative will transform the ability of partners in the Pacific Islands, Southeast Asia, and the Indian Ocean region to fully monitor the waters on their shores and, in turn, to uphold a free and open Indo-Pacific,” the White House statement said.

The data on vessel movements will be shared with participants in four “information fusion centers” located in India, Singapore, the Solomon Islands and Vanuatu, an island nation in the South Pacific Ocean, according to the White House.

“The Quad’s decision to provide data from commercial satellites to countries across the Indo-Pacific will provide great value to the region. In the South China Sea, it will enhance cooperation between some of the ASEAN countries and the Quad,” said Katoch, who previously served at the Indo-Tibetan border.

Shining a light on ‘dark shipping’

The White House said the IPMDA will track “dark shipping”— or ships trying to evade detection by turning off their transponders which transmit identification and location data. It will also identify other tactical-level activities such as illegal trans-shipments of banned weapons or illegally caught fish.

The data will integrate three critical regions — the Pacific Islands, Southeast Asia and the Indian Ocean region — in the Indo-Pacific.

The Quad could act as a check on Chinese naval expansion in the Indo-Pacific, Chaitanya Giri, an information systems consultant in New Delhi with the Indian foreign ministry’s autonomous Research and Information System for Developing Countries, told CNBC.

He said the new Quad initiative has the ability to track submarines through undersea commercial cables in the region.

“The Chinese navy is seeking to extend its influence over the first, second and third island chains. And to move eastward, towards the United States Coast and acquire greater presence in Guam and up to Hawaii. The Quad will keep a close eye on that,” according to Giri.

The three island chains are part of a geographical security concept used by military planners. They describe three successive lines of land masses stretching from islands closest to China, such as Taiwan, including the Philippines and Indonesia and ending with Hawaii at the other end of the Pacific.

Giri said the data would also help the enforcement of laws.

The trove of near real-time data that’s available under the program will include ship identification numbers or call signs, their locations, potential paths, their port of origin and final destinations, he said.

“These are the means necessary to keep track of dark shipping,” Giri said, adding that intelligence from ground sources can be combined with satellite data to determine even the cargo being carried by such ships.

What it could mean for China

“It is fairly well known that ships conducting illegal shipping are Chinese in their origin. The satellite data will serve to confirm this and improve accuracy and capabilities manifold,” according to Katoch, the retired general.

In response to CNBC’s request for comment, China foreign ministry said the accusation had no “factual basis.”

“China has always played an active, constructive role for peace in the region for [it] to flourish,” the ministry said in a statement. “We do not know where the described so-called ‘illegal shipping’ has come from. We also don’t accept criticism without any factual basis.”

Katoch said the Quad initiative would be welcomed in the Indo-Pacific region. “From a purely commercial perspective, this [maritime domain] information is something smaller nations desperately want,” he said, adding that the initiative could also identify and counter piracy, as well as terrorism threats.

Another analyst said the Quad’s aims were broader in scope.

“The maritime domain initiative’s real purpose is strategic,” said Pavan Choudary, chairman of Blue Circle, a geopolitical think tank in New Delhi. “This has the purported aim of checking ‘illegal fishing’ but it is really a means for Quad to advance [their] security initiatives,” he told CNBC.

Not everyone agrees that militarization will be the eventual outcome.

“This initiative really isn’t military so much as law enforcement in nature,” said Gregory Poling, director of the Southeast Asia Program and Asia Maritime Transparency Initiative at the Center for Strategic and International Studies.

“It will help small island and coastal developing states in the Indian and Pacific Oceans monitor and enforce laws in their own waters. By helping deliver public goods like this, the Quad does far more to compete with China than if it were to take explicitly anti-Chinese measures,” he told CNBC.

“The fact that most illegal fishing and militia operations are conducted by China will make the results of this initiative very embarrassing for Beijing, but unless it is going to better regulate its own fishing and militia fleets there really isn’t any counter it can take,” Poling added.

In a recent report, China’s state-backed publication Global Times said that while the initiative had not mentioned the country by name, it clearly targeted China. “The mechanism has made China the heart by hyping the country’s ‘threat,’ and no matter how it has sugarcoated its target to contain China, few regional countries will be fooled,” the paper noted.