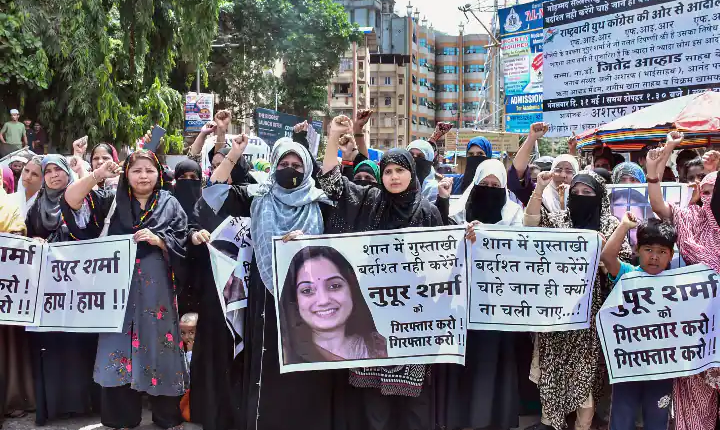 Remarks On Prophet: The whole country saw what happened in Kanpur after Nupur Sharma’s comment. The government is taking strict action against the accused in Kanpur. BJP has suspended Nupur Sharma, but Muslim organizations are now demanding the arrest of Nupur Sharma. On the other hand, Akhilesh Yadav has termed BJP’s action on Nupur as a mere sham on the pretext of UP minister Dayashankar Singh. He tweeted and said- “BJP should not only take pretentious action of suspension on Nupur Sharma, but take legal steps. Suspension from BJP on controversial statement also happened to him, who is today sitting as a minister in the BJP government of Uttar Pradesh.”

However, SP MP ST Hasan has thanked BJP for the action on Nupur and Naveen. On the other hand, Congress is describing the action of BJP as a step taken under pressure from outside forces. Here, Qatar, Iran and Kuwait summoned Indian ambassadors on Sunday over the controversial remarks of the Bharatiya Janata Party (BJP) leader about Prophet Mohammad. Important countries of the Gulf condemned these comments and lodged their strong objection.

A spokesperson of the Indian Embassy in Qatar and Kuwait said in a press release, “The Ambassador stated that those tweets do not in any way reflect the views of the Government of India. These are the views of marginalized elements.” The spokesperson said that the Indian Ambassador to Qatar, Deepak Mittal, held a meeting at the Foreign Office, expressing concern regarding some objectionable tweets by individuals in India defaming people of other religions. Went.

Vice President M. Venkaiah Naidu is currently on a visit to Qatar and on Sunday he met Sheikh Khalid bin Khalifa bin Abdulaziz Al Sani, Prime Minister and Interior Minister of Qatar. Earlier, the ministry said in a statement that Minister of State for Foreign Affairs Sultan bin Saad Al-Muraikhi handed over the note to the Ambassador of India.

The ministry welcomed the statement issued by the ruling party in India, in which it announced the suspension of the party leader. The ministry said that Qatar expects a public apology from the Indian government and an immediate condemnation of these comments. “Strict action has already been taken against those making derogatory remarks,” an Indian Embassy spokesperson said here.

Kuwait’s Foreign Ministry said Indian Ambassador to Kuwait Sibi George was summoned on Sunday and an official protest note was handed over by the Assistant Foreign Minister for Asia Affairs. Indian Ambassador to Iran Dhamu Gaddam was summoned by the Director General of South Asia to the Foreign Ministry in Tehran on Sunday evening, where a strong protest was expressed over the controversial remarks. According to the semi-official news agency ‘Mehar’, the Indian ambassador expressed regret and called any insult to the Prophet unacceptable.