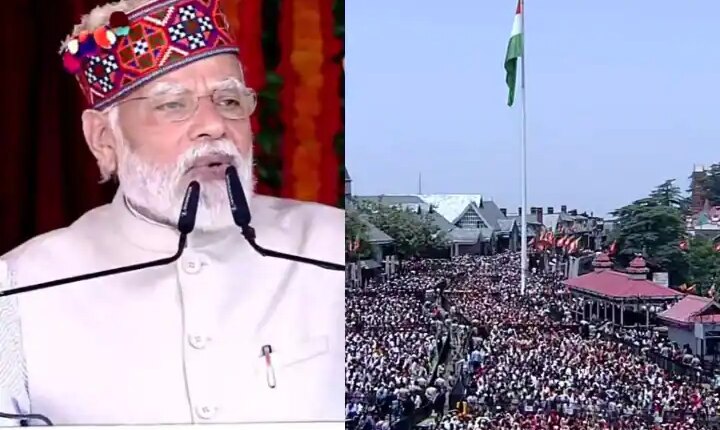 PM Modi Shimla Visit: Prime minister Narendra Modi On the occasion of the completion of 8 years of the Central Government, he reached Ridge Maidan in Shimla where he was given a grand welcome. The crowd gathered in thousands raised slogans of Modi-Modi as soon as PM Modi reached the stage. Addressing the public, PM Modi said that in these 8 years, whatever work could have been done for the welfare of all the people of the country, he has done and will continue to do so. He said that today both the situation and the picture are very different.

Actually, Himachal Pradesh CM Jai Ram Thakur and Union Minister Anurag Thakur were also present along with PM Modi on the stage of Ridge Maidan. Himachal Pradesh Chief Minister Jai Ram Thakur said from the Ridge Maidan, this Shimla Ridge ground is a very small ground, not everyone is able to reach the meeting place. I am grateful to the Prime Minister that he reached here on foot on Mall Road. Accepting the greetings of the public, PM Modi had a virtual dialogue with the beneficiaries of 17 schemes. Talking to PM Modi, a beneficiary said that life has become easier with the help of schemes. Many problems have been solved. One said that earlier our village did not have health facilities, but now with the help of schemes, we are also checked up and free treatment and medicines are also being given.

21 thousand crore gift given to farmers

After talking to the beneficiaries, PM Modi gave a deal of 21 thousand crore rupees to more than 10 crore farmers. Standing on the stage, he pressed the button and money was transferred directly to the farmers’ accounts through online medium. Talking to the public, the PM said, now the money of PM Kisan Samman Nidhi has been transferred to the accounts of crores of farmers of the country. They also got the money and today I have got the privilege of transferring money from the land of Shimla to the accounts of more than 10 crore farmers of the country. He further said that, today is a special day for me and on this occasion I have got an opportunity to salute the country, for which I am grateful.

Today the condition of the poor in the country is much better: PM Modi

Expressing happiness on the completion of 8 years of the government, PM Modi said, “It is my resolve that for the honor of every Indian, for the safety of every Indian, for the prosperity of every Indian, how the Indian should get a life of happiness and peace, every Whatever work I can do for the welfare of someone, keep doing that. Before the year 2014, there was talk of looting in the newspapers on TV. There was talk of loot, corruption, scams, bureaucracy, nepotism. There was talk of stuck-up plans. Today the situation has completely changed. He said that I proudly say that today there will be only one poor family in the country which is not associated with any scheme.

PM Modi further said that, be it PM housing scheme, scholarship or pension schemes, with the help of technology, we have minimized the scope of corruption. We are trying to give permanent solutions to the problems which were earlier considered permanent. He said that vote bank politics has happened in our country for decades. The politics of making your own vote bank has done a lot of damage to the country. We are working not to create vote bank, but to build a new India.

In the end, PM Modi proudly said that, 8 years ago today we were nowhere in terms of startups but today we are the third largest startup ecosystem in the world. He told that our youth are preparing a company worth 1000 crores almost every week.

Gujarat Political News: ‘The level of education in Narmada is very low’, AAP said on this statement of BJP leader – the system is bad in Gujarat