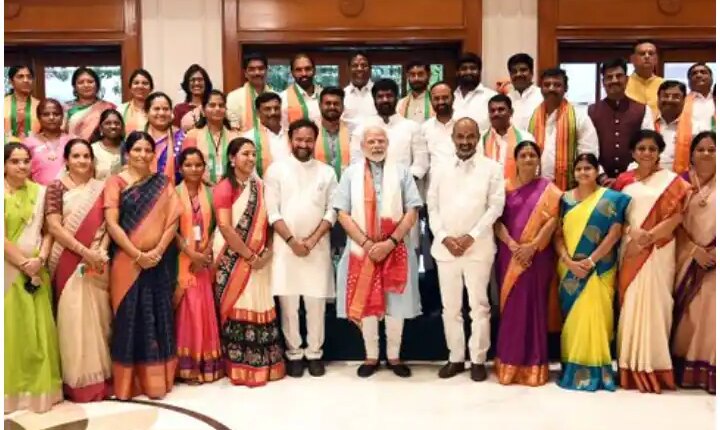 The Bharatiya Janata Party (BJP) is hoping for big gains in the southern state after an impressive performance in the 2019 Lok Sabha elections, assembly bypolls and Hyderabad municipal elections. Telangana BJP chief Bandi Sanjay Kumar and Union Minister G Kishan Reddy were also present along with the corporators. Union Minister Reddy is also from Telangana.

Met @BJP4Telangana corporators in GHMC and other Party leaders from Telangana. We had wide-ranging discussions on how to focus on community service endeavours and help people at the grassroots. BJP will work for good governance and ending dynamic misrule in Telangana. pic.twitter.com/y0Xt3sWz40

In a tweet, PM Modi said, “Met BJP councilors in GHMC and other party leaders from Telangana. We had an extensive discussion on focusing on community service efforts and helping people at the grassroots level. BJP Good Governance in Telangana and will work to end the dynastic misrule.”

Chief Minister and chief minister of the ruling Telangana Rashtra Samithi (TRS) in the southern state, K Chandrasekhar Rao, is working to garner support in the light of the anti-BJP alliance at the national level. The BJP has so far not been able to make much headway in southern India outside Karnataka, but its recent performance in Telangana gives the party hope of making a strong presence in another southern state. The party is also holding a meeting of the National Executive in Hyderabad next month.