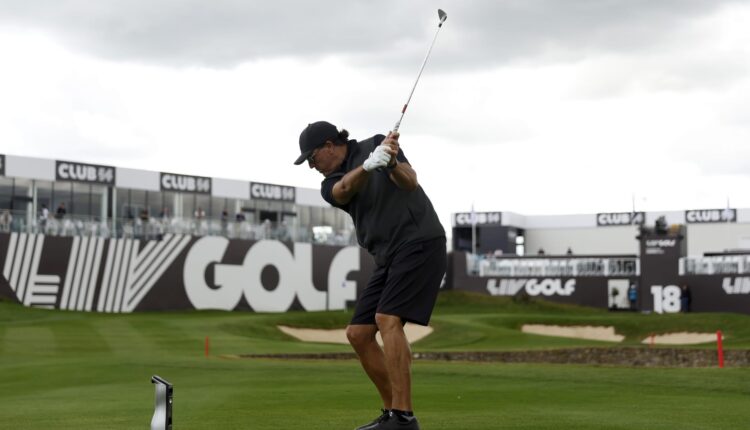 Phil Mickelson plays on the 18th during the Pro-Am at the Centurion Club, Hertfordshire ahead of the LIV Golf Invitational Series.

The PGA Tour has suspended 17 golfers, including major championship winners Phil Mickelson and Dustin Johnson, who are competing Thursday in the Saudi-backed LIV golf event near London. The suspensions are indefinite.

The players “did not receive the necessary conflicting event and media rights release — or did not apply for releases at all,” according to an internal PGA memo. The PGA will also suspend any future tour players who play in LIV events, says the memo, which is dated Thursday.

“These players have made their choice for their own financial-based reasons,” the memo reads. “But they can’t demand the same PGA TOUR membership benefits, considerations, opportunities and platform as you.”

Mickelson has been a major recruiter for LIV Golf, which is funded mainly by Saudi Arabia’s Public Investment Fund. He hasn’t participated in a golf tournament since February. His deal with LIV is reportedly worth about $200 million.

Greg Norman, another former PGA star, serves as the CEO of LIV Golf Investments. Norman, Mickelson and others have taken heat for aligning with the venture despite the Saudi government’s past human-rights abuses, including its involvement in the killing of Washington Post columnist Jamal Khashoggi.

Mickelson didn’t immediately respond to a request for comment from CNBC. Johnson said he had no comment.

LIV Golf in a statement called the decision “vindictive” and said it “deepens the divide between the Tour and its members.”

“It’s troubling that the Tour, an organization dedicated to creating opportunities for golfers to play the game, is the entity blocking golfers from playing. This certainly is not the last word on this topic. The era of free agency is beginning as we are proud to have a full field of players joining us in London, and beyond,” the organization said.

The LIV event in England is the first of eight scheduled tournaments. Five of them are set for the United States, including two on courses owned by former President Donald Trump.

Here is the list of players. The asterisks denote players who have already told the PGA that they’re resigning their memberships.

This is a developing story. Check back for updates.