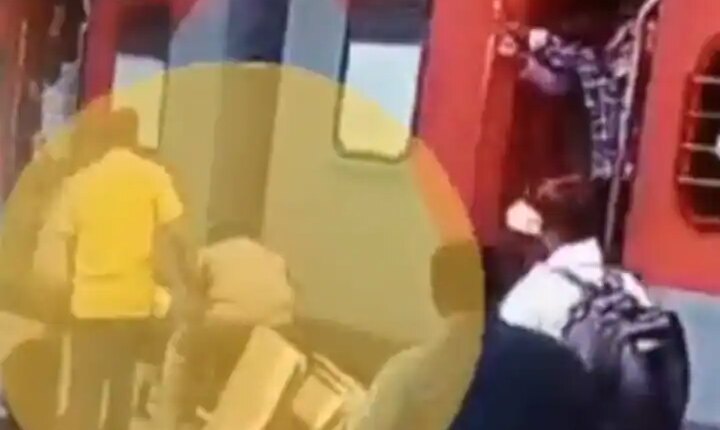 Passenger Life Save: A major accident was avoided at Prayagraj Railway Station. There was chaos due to falling down from a passenger train. But it was fortunate that the GRP personnel present there, showing agility, saved the passenger safely. The passenger has suffered minor injuries in this accident. The passenger is completely safe. At the same time, this entire incident of this incident was captured in the CCTV camera installed at the station.

This incident happened in the afternoon at Prayagraj station when a man from Jharkhand was going from Prayagraj towards Mumbai. The train reached Chheoki railway station in the afternoon. Where the train was about to leave for Mumbai after stopping for 5 minutes. But before the train left the station, a passenger hanging on the S-6 door fell down from the train.

When the passenger fell down from the train, two GRP jawans Ramu Yadav and Vijendra Yadav saw him falling down. Without wasting time, both the jawans saved the life of the passenger by dragging him out before going inside the train. The passenger thanked the GRP jawans.

Averting a major mishap on Prayagraj station, GRP Head constable Ramu Yadav saved the life of a passenger who fell from a moving train while sitting at the gate. #UPPolice pic.twitter.com/O5RAOM42Og

Let us tell you that often such accidents are seen in railway platforms. Two months back also a similar video went viral on social media. A passenger falls off the train while trying to board a moving local train at Wadala railway station in Mumbai. Only then the Railway Protection Force personnel present there saves the life of the passenger.