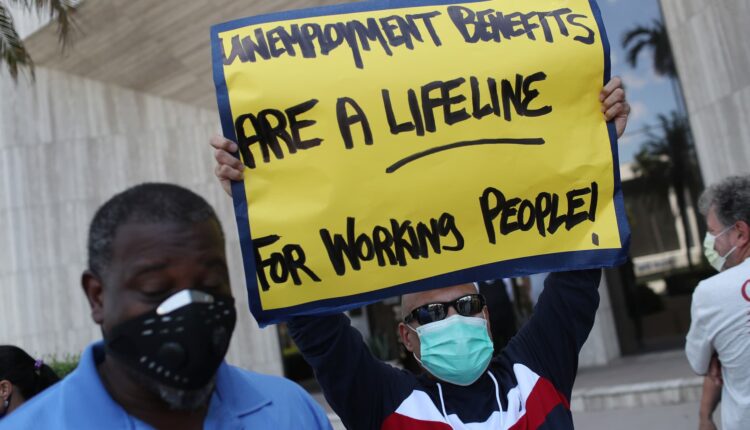 Demonstrators participate in a protest asking U.S. senators to support the continuation of unemployment benefits on July 16, 2020 in Miami Springs, Florida.

The GAO on Tuesday also added unemployment insurance to its “high-risk list,” which outlines programs and operations vulnerable to waste, fraud, abuse or mismanagement, or in need of transformation.

Some fixes are under way but “many long-standing issues remain unaddressed,” which poses a threat during a future crisis, according to the federal watchdog.

More from Personal Finance:
Here are options for handling an unpaid 401(k) loan
IRS warns of scams involving jobs, stimulus checks, tax refunds
Why your next quarterly 401(k) statement may be alarming

“Leaving [them] unaddressed will heighten the risk of the UI system not meeting fundamental program expectations of serving workers and the broader economy, and may undermine public confidence in the responsible stewardship of government funds,” the GAO said.

Congress bolstered the unemployment program to an unprecedented degree amid mass joblessness. The unemployment rate ultimately approached 15% in April 2020, the worst since the Great Depression. The economy shed nearly 22 million jobs in the span of two months.

Lawmakers raised the amount of weekly benefits, extended the duration of aid, and made it available to millions of self-employed, gig and other workers typically ineligible for assistance.

Proponents say the funding propped up households and staved off an even deeper recession. But fissures in program integrity — already stressed before the pandemic — became more apparent as workers filed a record number of benefit claims, the GAO said.

For one, many workers faced extreme delays in receiving benefits after applying. States generally aim to start paying benefits within 21 days of a claim.

Before the pandemic, states had achieved that outcome for 97% of people; by June 2020, the share plummeted to 52%, according to the GAO. Many states continue to struggle: The share was 63% in February.

Payment and customer-service delays were fueled by low staffing levels, resource constraints and outdated computer systems, for example. States also had to implement the newly created federal programs, sometimes from scratch, while managing the influx of claims.

One anonymous North Dakota official cited by the GAO compared implementing the Pandemic Unemployment Assistance program to “trying to build a house at a million miles an hour [without] really know[ing] what you are doing.”

(PUA was the temporary federal program for self-employed and gig workers.)

Rep. Richard Neal, D-Mass. and chairman of the House Ways and Means Committee, during a hearing on Sept. 10, 2021.

The Government Accountability Office found big differences in benefit payment according to race and ethnicity in the PUA program. In some cases, the share of white applicants who received aid was twice that of Black applicants.

However, it’s unclear why this occurred, GAO said. State officials suggested fraud may have played a role — for example, if criminals more regularly used the stolen identities of Black workers to claim benefits and were subsequently denied, it would artificially reduce the share of Black workers receiving PUA benefits.

“It’s unacceptable that applicants of color received benefits at lower rates, and there is no further data to understand these inequities or enforcement tools to hold states accountable,” Rep. Richard Neal, D-Mass., and chairman of the House Ways and Means Committee, said in response to the report.

Fraud also ballooned during the pandemic, as criminals were lured by historically rich benefits and a system pressured by a deluge of claims.

States and the U.S. Department of Labor have moved to clamp down on fraud by requiring more extensive identity verification, for example. However, in some cases those measures delayed benefits for legitimate claimants.

The GAO offered several options to help improve the country’s unemployment framework, many of which have long been sought by worker advocates.

For example, it suggested permanently broadening eligibility to independent contractors and the self-employed; federalizing unemployment benefits to increase consistency (states currently have a broad degree of latitude in how they administer benefits); increasing federal funding for benefit administration; improving and modernizing computer systems; and better allocating resources to address fraud.