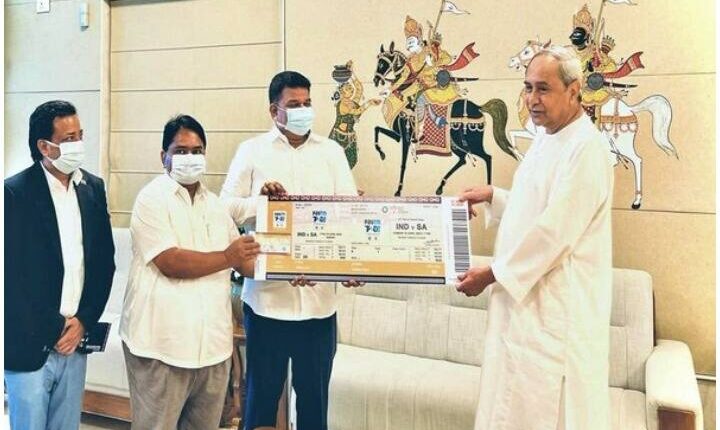 India vs South Africa 2nd T20: After the IPL, cricket lovers will once again be able to see their favorite player taking wickets on the field and hitting strong shots. The Indian cricket team is going to host South Africa for a five-match T20 series from June 9. During this, the first T20 of the series will be played on the ground of Arun Jaitley Stadium in Delhi and the second match will be played in Cuttack on June 12.

Team India will land to play its second T20 match at Barabati Stadium in Cuttack, Odisha. Before that, there is a competition among cricket lovers to buy tickets to watch this match. On the other hand, Odisha Chief Minister Naveen Patnaik has bought the first ticket for the second T20 match between India and South Africa to be played on June 12.

I am rooting for #TeamIndia for the upcoming #INDvsSA series. Hope fans from all over the world get to see an exciting match at #BarabatiStadium, #Odisha, Looking forward to see you all in #cuttack, #T20#MenInBlue#TeamIndia#bleedblue pic.twitter.com/siKRnh0HYk

In fact, Odisha Cricket Association President Pankaj Lochan Mohanty and Odisha Cricket Association (OCA) Secretary Sanjay Behera have given this ticket to Chief Minister Naveen Patnaik on Monday. Along with this, OCA Secretary Sanjay Behera has also informed CM Naveen Patnaik about the arrangements made for the smooth sale of tickets.

Talking about the series, Virat Kohli and Rohit Sharma have been rested in this series and KL Rahul has been made the captain of Team India. At the same time, Rishabh Pant, who has been performing well in IPL and Team India for some time, has been made the vice-captain. At the same time, fast bowlers Arshdeep Singh and Umran Malik, who performed brilliantly in the recently held IPL, have been included in Team India for the series.