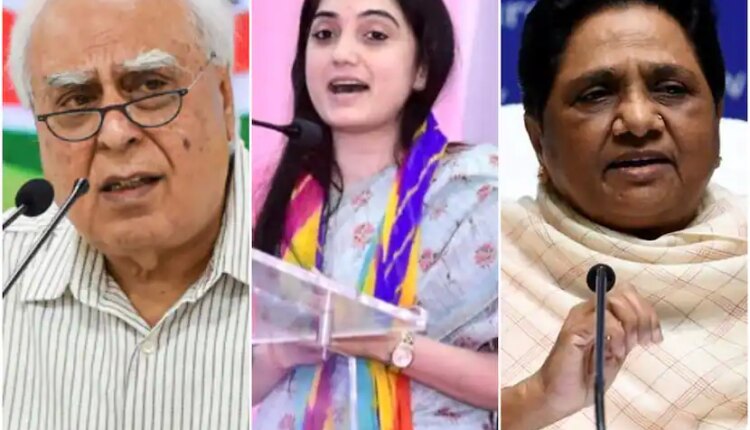 There is an uproar in the country and abroad over the remarks on Prophet Muhammad by Nupur Sharma, the former national spokesperson of BJP. Although BJP has sacked Nupur Sharma, the opposition is still attacking the BJP and is adamant on the demand to send her to jail. The matter had escalated to such an extent that Qatar, Kuwait and Iran had summoned the Indian ambassadors on Nupur Sharma’s remarks. Know how the opposition is targeting BJP regarding this matter.

Former senior Congress leader and former Union Minister Kapil Sibal said,Nupur Sharma and Naveen Jindal, these people represent the mindset of politics of hate. Now is the time to push them back.

They represent the mindsets of the politics of hate

Time to push back

At the same time, senior Congress leader Digvijay Singh tweeted and said, “The Government of India describes the statements of two BJP spokespersons as ‘fringe elements’. Who appointed him as the official spokesperson of BJP? Will the BJP president accept the responsibility of appointing ‘fringe elements’ as spokesperson and publicly apologize? Now what about registering criminal cases against two suspended and expelled BJP leaders? Shouldn’t UP Police register a case against them? Yogi Adityanath But also taunted. Digvijay Singh wrote, “Isn’t speaking against any religion an offense under the law? UP Police will not register a case, because in that definition CM UP can also fall under the category of ‘fringe element’.

Isn’t speaking against any Religion a crime under the Law? UP Police won’t file any case. Why?
Because in that definition CM UP may also come under the “Fringe Element” category!!@INCIndia @PMOIndia @dgpup

At the same time, Bahujan Samaj Party Chief Mayawati said, “It is necessary to respect all religions in the country. The use of offensive language for any religion is not appropriate. In this matter, BJP should also strictly tighten the noose on its people. Only suspending and expelling them will not work, but they should be sent to jail under strict laws. Not only this, it is very important to get to the bottom of the violence that has happened in Kanpur recently. Also, innocent people should not be harassed in the police action against this violence, this is also the demand of BSP.

However, after this Nupur Sharma issued a statement on Twitter and apologized for commenting on Prophet Muhammad. Nupur wrote, “I was going on TV debates for the past several days, where my adorable Shiva ji was being insulted every day. It was being said in front of me that it is a fountain, not a Shivling. Many Shivlings are found on every footpath of Delhi. Go go and worship. I could not bear the insult of our Mahadev Shiva ji like this again and again in front of me and I said some things in anger. If my words have hurt anyone’s religious sentiments, then I take back my words. It was never my intention to hurt anyone.