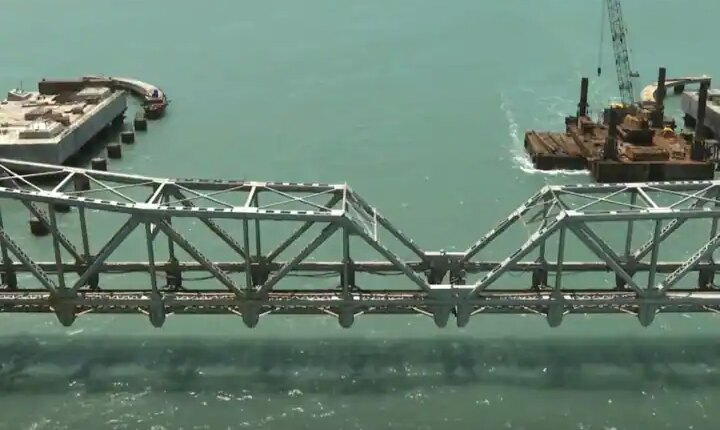 Pamban Bridge Construction: India’s world famous Pamban Bridge, which connects the pilgrimage site Rameshwaram to the country by sea, has now turned 114 years old. The railway has now decided to retire this magnificent and beautiful bridge, which opens in two parts from the middle, giving way for ships. But before that, a new Pamban Bridge is almost ready to be built right next to the Pamban Bridge. This bridge will be the first such bridge in the country that will rise above the middle and ships will be able to pass under it.

Let us tell you that the existing old Pamban Bridge was damaged in the cyclone of 1964. Some part of it was washed away in the sea, then later E Sreedharan, who came to be known as Metro Man, had strengthened it by repairing it again.

Even today, trains go to Rameshwaram by passing through this old Pamban Bridge. But due to the salty water of the sea being tolerated for a century, now it has started rusting. 12 pairs of trains pass daily through this bridge. But due to weakening, now trains can run from this bridge only by crawling at a speed of 10 kilometers per hour. While the newly built bridge will allow trains to run at a speed of 80 kilometers per hour.

Features of the new Pamban Bridge

This was the problem with the old Pamban Bridge

This special span of the old Pamban bridge opens from the beach in two parts like a flap, due to which ships have been passing through it. But the difficulty was that for this work, 16-16 people had to stand and run the string rolling machine with their hands on both sides of this work, then the span of the bridge could be opened somewhere. But now in the newly being built vertical lift bridge, all this work will be done by automatic lift machine, in which just by pressing the button, the lifts on both sides will simultaneously raise the special span of the bridge and then the ships will be able to come out from under it.

According to railway engineers, more than half of the Pamban bridge was washed away by the cyclone that came in December 1964. Along with this, the entire train with 110 passengers was also absorbed in the cyclone. But after that the Pamban Bridge was repaired again in a record 68 days and trains were started operating on it.

The special thing is that the railway bridge that is being prepared now has such a technology that if the wind blows at a speed of 58 meters per hour, then an alert signal will be issued automatically and if there is any manual way of the train. Even if he clears, the train will get a danger signal and the train will not be able to cross the bridge.