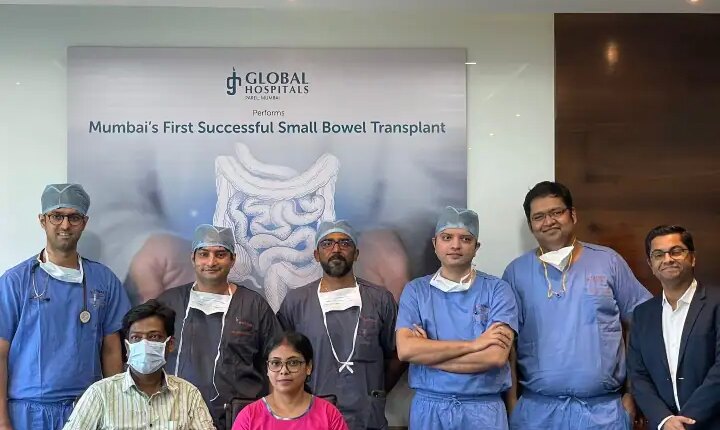 Anirban Samanta, a resident of Kolkata, started having severe stomach ache in April 2022. It was treated as superior mesenteric artery thrombosis. Because of this he had bowel gangrene. He got it treated at the local hospital. He was performed anastomosis and jejunostomy on 17 April 2022. He was on parenteral nutrition since then and was referred to the Zonal Transplant Coordination Center (ZTCC) in May 2022. An alert was received on 18 May 2022 and the team began recovery after a negative report on the CDC cross match .

Dr Gaurav Chaubal, Director, Department of Liver, Pancreas, Intestine Transplant and HPB Surgery, Global Hospital, Parel, said, “Small bowel donation is important for the treatment of people who suffer from malformation of the intestine, intestines since birth. suffer from non-functioning of the intestines, or whose part of the intestinal tissue is lost.”

Dr. Chaubal further added, “Early last month, Anirban was listed with (ZTCC Mumbai) for an organ transplant as it was the only treatment available to him considering the challenges he faced. Post-surgery The patient has shown good progress and has made a complete recovery.”

Anirban is happy with the transplant

Anirban Samanta said, “When I was in Kolkata, the doctors there had given up this hope. They did not expect that I would be able to live more than two months.” Samantha says that later we came to know about Dr. Gaurav Chaubal, knowledgeable in such cases and we came to meet him in Mumbai. After meeting him I saw a hope of my survival. As expected my surgery was successful. We are thankful to the donor family for this generous decision of donating our organs in this hour of grief. We thank them.

Small bowel transplant is a complex and rare surgery in India. So far it has been done about 12 times in the country. More than 50% of such surgeries have been performed in Maharashtra alone. Anirban Samanta’s surgery is the first such surgery performed at Global Hospital in Mumbai. Dr. Vivek Talolikar, CEO, Global Hospital, said, “The success of the bowel transplant is a proud moment for the hospital, as with the discharge of this patient, Global Hospital, Parel, Mumbai, is the only private hospital in India to have developed multiple organs such as kidney. Transplants have been given importance, which includes liver, heart, lungs, hands, pancreas and small intestine.