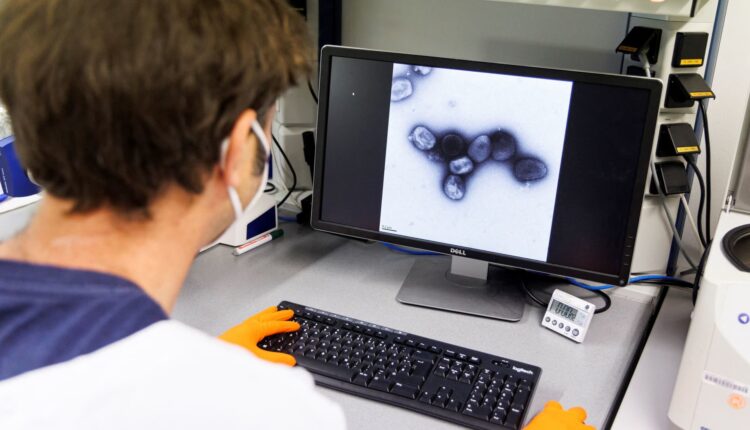 An employee of the vaccine company Bavarian Nordic shows a container with fibroblast cells from chicken embryos for the propagation of vaccine viruses in a laboratory of the company in Martinsried near Munich, Germany, May 24, 2022. The company, headquartered in Denmark, is the only one in the world to have approval for a smallpox vaccine called Jynneos in the U.S. and Imvanex in Europe, which is also effective against monkeypox.

The monkeypox virus, which has now been diagnosed in hundreds of people in 26 countries, may have been quietly circulating for years before its sudden emergence worldwide, some scientists speculate.

Infectious disease experts and scientists at genetic labs are urgently looking for clues to explain why a virus that has been found in West Africa for half a century and typically doesn’t spread readily from person to person made such a dramatic and troubling appearance in the past month.

“There may have been undetected transmission for a while,” said Dr. Rosamund Lewis, the World Health Organization’s technical lead for monkeypox during a briefing Wednesday. “What we don’t know is how long that may have been. We don’t know if it’s weeks, months or possibly a couple of years.”

At the University of Leuven in Belgium, virology professor Marc Van Ranst told NBC News that his laboratory’s sequencing revealed genetic mutations of the virus that were “limited” and that “none of them are smoking guns.

“Everybody is interested in more complete genomes to get an idea about quite an important question: How long have these viruses been circulation, under the radar?” Van Ranst said. “I think nobody believes this jumped out of Africa a couple of weeks ago.”

University of Edinburgh scientists recently sequenced samples from the outbreak and posted their findings on May 30. The samples they investigated descended from a version of monkeypox that was identified in Singapore, Israel, Nigeria and the United Kingdom between 2017 and 2019.

While the investigators did identify an “unexpectedly large number” of changes to the virus’s genetic code since that time, some experts do not believe such shifts necessarily explain the breadth of the current outbreak.

In Africa, most human cases of monkeypox have historically occurred through exposure to infected animals such as rodents and not through person-to-person transmission.

“What’s likely happened is an endemic infectious disease from Africa found its way into a social and sexual network and then was greatly aided by major amplification events like raves in Belgium to disseminate around the world,” Dr. Amesh A. Adalja, a senior scholar at the Johns Hopkins Center for Health Security, said.

“And then,” Adalja added, “because it’s being transmitted through close contact in sexual encounters, many of the lesions are getting mistaken for other sexually transmitted infections, which may be delaying diagnosis.”

“Whenever you start looking for a disease that’s new in a population, you find many, many more cases,” Dr. David Heymann, a professor at the London School of Hygiene and Tropical Medicine who formerly led the WHO’s Programme on Emerging and other Communicable Diseases, told NBC News.

Heymann supported the theory that the disease may have been present in some populations for several years outside the 11 Central and West Africa countries where the virus has become endemic. Cases may be circulating stealthily among people outside the global gay community, he suggested.

“The concern is looking in only one population rather than looking more broadly,” he said.

The infection, which can cause painful lesions across the body that leave lasting scars, typically runs its course in an individual in about three weeks. Most of the identified cases in Europe and the U.S. outbreak have been mild — some so atypically subtle they have been mistaken for other sexually transmitted infections — and have occurred among gay, bisexual and other men who have sex with men. Experts stress, however, that it is the close physical contact of sexual activity that is the key factor driving transmission.

Unlike what is typically seen in monkeypox cases in Africa, some of the recent infections have led to “very, very mild” symptoms, perhaps involving only a single lesion, Dr. Sébastien Poulin, an infectious disease specialist at St-Jérome Hospital in Montréal who diagnosed one of the first Canadian outbreak cases, told NBC News. “Physicians need to be aware of that.”

In addition, monkeypox illness usually starts with fever, but some of the recent U.S. cases have not reported fever or other early signs before the lesions appear, according to the Centers for Disease Control and Prevention.

“For this reason, cases might be confused with more commonly seen infections such as varicella zoster or sexually transmitted infections,” such as genital herpes or syphilis, a CDC study released Friday reported.

Sixty-six people have died of the infection in African nations in 2022, according to the World Health Organization. Nigeria has been grappling with its own monkeypox outbreak since 2017 — one that may have served as an incubator for the global spread.

McQuiston acknowledged the possibility that monkeypox virus cases had been missed previously in the U.S., but “not to any great degree,” she said during the briefing. Two cases were detected in the U.S. in 2021 — an individual in Texas in July and a separate case in Maryland in November. Both had traveled recently to Nigeria.

Van Ranst said the coming days of the outbreak will be critical for controlling the disease. As of June 1, there were 643 confirmed cases, according to the WHO. If by next week the cumulative case count follows an exponential curve and hits perhaps 4,000, “then this is not under control,” he said.

If the figure instead only increases to about 1,000, then the outbreak is likely only expanding linearly, which bodes well for global control of the virus, Van Ranst said.