‘March for Our Lives’ protests against gun violence sweep nation 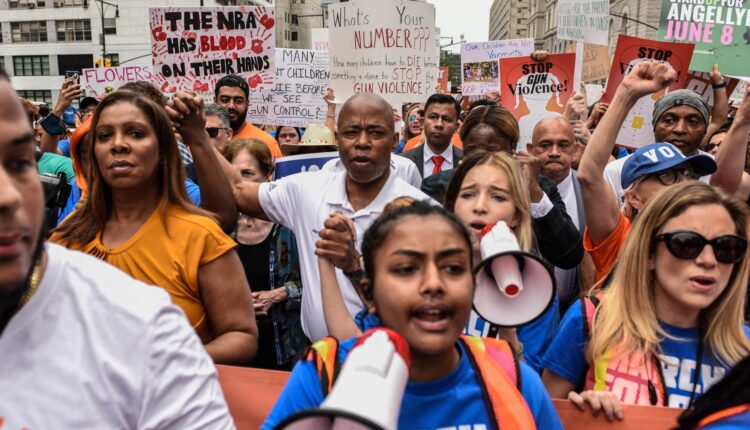 Letitia James, New York’s attorney general, left, and Eric Adams, mayor of New York, center, march with demonstrators over the Brooklyn Bridge during a March For Our Lives rally in New York, U.S, on Saturday, June 11, 2022.

Thousands of demonstrators took to the streets in hundreds of protests across the country Saturday to push lawmakers to take action on gun violence in the wake of recent mass shootings in Uvalde, Texas, and Buffalo, New York.

Protesters have turned out to more than 450 rallies nationwide, with the largest gathering taking place in Washington, D.C., which started at noon and ended at 2 p.m.

D.C. Mayor Muriel Bowser drew loud cheers from the crowd there as she called for common sense gun laws, including mandatory background checks and a ban on assault rifles.

Rep. Cori Bush, D-Mo., shared a story of having been in an abusive relationship when she was younger in which her partner shot at her multiple times. “That moment when gun violence strikes is so dramatic and so preventable,” she said. “I didn’t know when he would stop.”

The rallies were organized by March for Our Lives, a youth-driven organization first created by students who survived the mass shooting at Marjory Stoneman Douglas High School in Parkland, Florida, in 2018.

In Parkland, where the movement began, hundreds of demonstrators gathered outside the Pine Trails Park Amphitheater Saturday morning to demand background checks for all gun sales, the implementation of “red-flag” laws and an increase in the minimum age to buy semi-automatic rifles from 18 to 21.

Manuel Oliver, whose son, Joaquin, was among those killed in Parkland, also addressed the crowd in Washington. “Our elected officials betrayed us and have avoided the responsibility to end gun violence,” he said, calling for students not to attend school until elected officials “stop avoiding the crisis of gun violence in America.”

At around 1:30 p.m., a person standing near a group of counter-protesters began to yell during a moment of silence for victims of gun violence, prompting some in the crowd to run away. Several attendees were seen crying after the incident.

Katie Hathaway, an attendee who traveled from Florida for the march, said the incident was “traumatizing.” She heard a shout and everyone started running.

Shortly after, a man took to the stage to reassure the crowd, saying, “There is no threat.”

According to U.S. park police, the individual who interfered with the event “was detained by officers.” No weapons were involved, police said.

As talks on gun restrictions continue on Capitol Hill, the House passed a “red-flag” bill Thursday that would allow a judge to take firearms away from individuals who pose an imminent danger to themselves or others. The legislation, which drew five Republican votes, is viewed as having a greater chance of advancing than some of the other bills in the evenly split Senate.

On Wednesday, the House also passed a series of new gun measures, which include raising the minimum age to buy semi-automatic rifles from 18 to 21. That legislative package is all but guaranteed to fail in the upper chamber because of Republican opposition.

“We need to put aside our politics and save our kids and loved ones from this senseless and horrific violence before it impacts them,” David Hogg, a 2018 graduate of Marjory Stoneman Douglas High School and the co-founder of March for Our Lives, said in a statement ahead of the rallies.

According to Serena Rodrigues, a national coordinator for March for Our Lives, the organization participated in 71 meetings with elected officials on Capitol Hill this past week.

“I feel confident that we’ll get something probably like universal background checks,” she told NBC News. “But we’ll keep pushing for more.”

At least 254 mass shootings have taken place in the U.S. so far this year, according to the Gun Violence Archive. These include the Uvalde and Buffalo shootings.

“We’re coming out of Covid and people are trying to go back to normal, get back into schools and into work, but I think as a society right now, we’re realizing that this is not the normal we want to go back to,” Rodrigues said.

In Buffalo, a white gunman killed 10 people and wounded three other in a local supermarket in a Black neighborhood on May 14, in a shooting authorities deemed a “racially motivated, hate crime.”

Garnell Whitfield Jr. whose 86-year-old mother, Ruth, was fatally gunned down during that attack, said he was at the Washington protest to demand sensible gun reform.

“We hear a lot about prayer and prayer is wonderful,” he said on stage in front of a crowd of several hundred people. “But prayer requires action. You pray and then you get up and walk.”

WASHINGTON, DC – JUNE 11: Erica Ford speaks during March for Our Lives 2022 on June 11, 2022 in Washington, DC. Erica Ford is a gun violence prevention activist and founder of LIFE Camp, an organization committed to putting an end to gun violence in communities across the country. Most known for her work with vulnerable youth, Erica is credited with reimaging effective pathways to public safety in inner-city communities. (Photo by Leigh Vogel/Getty Images for March For Our Lives)

In New York, where at least dozen separate rallies were expected to take place, music duo Aly and AJ spoke at one of the demonstrations about surviving a mass shooting while being on tour.

“Aly and I actually grew up shooting. Our parents even owned guns. We know about gun safety,” AJ said. “But after the string of deaths that continue to flood our news I never want to step foot on a shooting range again.”

“I never want to shoot a gun for fun again. There is nothing fun about guns when you know the damage they can do,” she said.

Responding to calls for stricter gun laws, some Republicans have proposed increasing mental health services to help prevent the next tragedy. But experts in the field say blaming mental health is a deflection from the fact that gun control is a necessary part of prevention.

“Let’s stop using mental health as a scapegoat from confronting white supremacy in our country,” Hogg told the crowd.

Ten days after the Buffalo shooting, 19 students, mostly fourth graders, and two teachers were killed by a gunman who entered an elementary school in Uvalde on May 24.

The president of March for Our Lives in Parkland, Zoe Weissman, told MSNBC she was rehearsing for a play when she heard about the assault in Uvalde.

In middle school next door to Marjory Stoneman Douglas High School at the time of the shooting, Weissman, now 16, recalled feeling devastated by the news from Uvalde, saying she would continue to fight against gun violence to prevent more children from being killed and from living with the life-long trauma that comes with surviving a mass shooting.

In 2020, guns became the leading cause of death among people between the age of 1 and 19 in the U.S., more than vehicle crashes, drugs overdoses or cancer.

Zoe Touray, who survived a shooting at Oxford High School in suburban Detroit nearly seven months ago, showed up to the rally in Washington in the hope that this time something would be done to save more lives.

“I wasn’t old enough to remember the last march. I probably was in middle school,” Touray said. “So, to be able to see it all come to fruition in person, it gave me so much more optimism.”