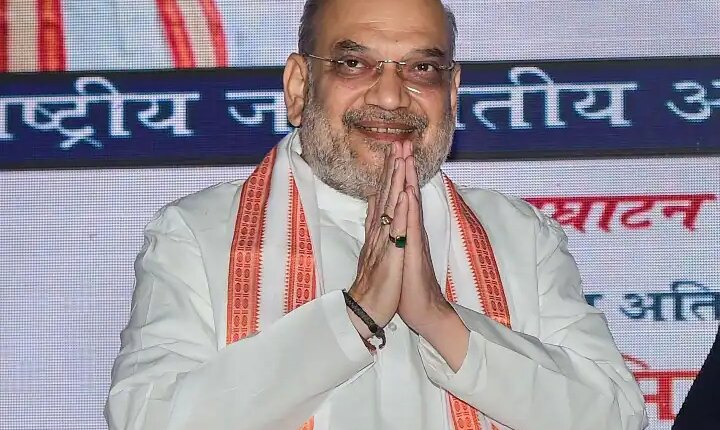 Union Home Minister Amit Shah Speech: Union Home Minister Amit Shah said on Tuesday that the Prime Minister Narendra Modi The number of districts affected by Left Wing Extremism has come down by 70 percent during the tenure of the Central Government led by Narendra Modi. In his address after inaugurating the National Tribal Research Institute, Shah also said that the Armed Forces Special Powers Act (AFSPA) has been removed from more than 66 per cent of the Northeast region.

The Union Home Minister said that the Northeast and the Left Wing Extremism-affected areas of the country are tribal dominated and security is the biggest need for development there. He said that a safe Northeast and a safe central India paves the way for the development of the tribal community.

How many security personnel lost their lives during Congress rule?
Home Minister Amit Shah said that 8,700 untoward incidents took place in the northeastern states in eight years when the Congress was in power, while it came down to 1,700 in the Modi government. He said that 304 security personnel had lost their lives in the Northeast during the Congress regime, while the number was only 87 in the Modi government.

Shah said that the Planning Commission in the country, which has now become NITI Aayog, Life Insurance Corporation of India and Heavy Electricals Limited of India have contributed significantly in the progress of the country. He said that in the same way the National Tribal Research Institute will play a major role in the development of the tribal community of the country.

Central government increased the budget of Eklavya residential schools
Amit Shah said that this institute will prove to be the backbone of tribal development in the journey of 100 years of independence of the country. He said that after coming to power, Prime Minister Modi has given top priority to tribal research and education. He said that in the year 2014, seven crores were kept for this purpose during the Congress rule. In the year 2022, we kept Rs 150 crore. The Union Home Minister also said that the budget of Eklavya residential schools in the Modi government has been increased from Rs 278 crore to Rs 1,418 crore in this financial year.

He said that the government is spending Rs 1.09 lakh on every tribal student of Eklavya residential schools, whereas earlier this expenditure was only Rs 42 thousand. Shah emphasized that the BJP has the maximum number of tribal MPs and ministers.

What did Amit Shah say for Jal Jeevan Mission?
Amit Shah said that the previous governments only talked about tribal development. He asked whether the previous governments provided clean drinking water to the tribal people or constructed toilets in their homes? Did he give health card to the scheduled tribe community? Shah said that the Modi government provided clean drinking water to 1.28 crore tribal families under the Jal Jeevan Mission and built toilets in 1.45 crore houses.

How many museums have been built by the central government for the tribals across the country?
The Union Home Minister said that we have given Ayushman cards to 42 lakh scheduled tribe families and built more than 40 lakh houses for tribals under the Pradhan Mantri Awas Yojana. Shah said that the Modi government has recognized the sacrifice and valor of freedom fighters of the tribal community and in their honor 10 museums are being built across India at a cost of about Rs 200 crore.

Union Law Minister Kiren Rijiju said that Indian tribes are spread all over the country, but earlier people did not consider them as part of the mainstream. He said that the Modi government believes that India will not progress unless the Scheduled Tribes move forward. Union Minister for Tribal Affairs Arjun Munda said that policies and programs for the development of tribal people have been strengthened and transparent during Modi’s tenure as Prime Minister.

Rajya Sabha Election: Magician Aanchal’s show for the MLAs involved in the barricade in Udaipur, know how confident Gehlot is about the number game?