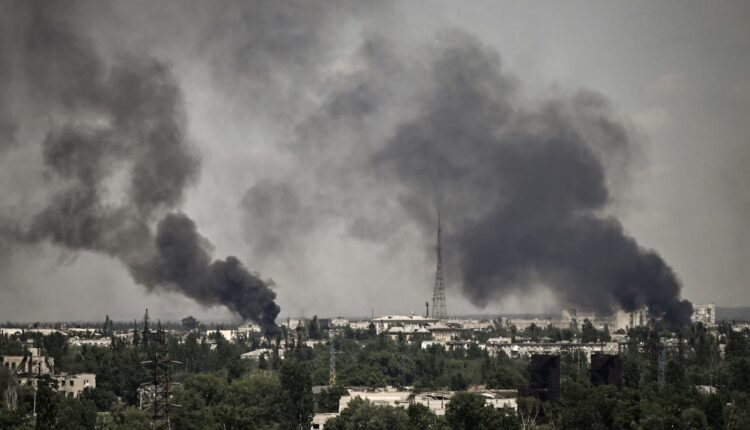 Sweden’s government announced a new batch of weapons and financial aid to be delivered to Ukraine, including anti-tank weapons, anti-ship missiles and rifles.

“The proposals that are submitted (to parliament) mean that allocated funds for the central government budget will increase by SEK 1.0 billion ($101 million) in 2022,” Sweden’s finance ministry said in a statement, adding that it “sees a continuing need” to support Ukraine.

President of Senegal Macky Sall speaks to media during an EU-Africa Summit on February 17, 2022 in Brussels, Belgium.

Russian President Vladimir Putin will meet with African Union leader and Senegalese President Macky Sall on Friday to discuss unblocking grain and wheat stocks that have been frozen by Russia’s war in Ukraine.

The meeting, which will be held in the southern Russian city of Sochi, is aimed at “freeing up stocks of cereals and fertilizers, the blockage of which particularly affects African countries,” as well as easing the conflict in Ukraine, a statement from Sall’s office said.

Putin has been accused of weaponizing food and hunger, as his forces have now for months blocked vital ports and attacked agricultural logistics hubs in Ukraine, which is a major exporter of much of the world’s grains. Together, Russia and Ukraine provide more than a quarter of the world’s cereals, as well as other important cooking staples like sunflower oil.

The disruption to agricultural exports has sent food prices soaring, particularly for African and Middle Eastern countries that rely heavily on imports from Russia and Ukraine.

Merkel described Russia’s invasion of Ukraine as a “barbaric war of aggression” which constituted a “far-reaching turning point” and the most “glaring breach of international law” in Europe since World War Two.

“My solidarity goes out to Ukraine which has been attacked and raided by Russia,” the former leader said at a German trade union event in Berlin on Wednesday night, adding that Ukraine’s right to self-defense was indisputable.

Merkel, who led Germany for 16 years, has come under heavy scrutiny in the last few months for her history of friendly relations with Russian President Vladimir Putin and track record of expanding economic ties between Russia and Germany.

Many criticize her for making Germany more reliant on Russian energy imports, particularly with the establishment of the first Nord Stream gas pipeline between the two countries. She also drove the development of the now-defunct Nord Stream 2 pipeline, which her predecessor Olaf Scholz suspended just before Russia invaded Ukraine.

The Biden administration aims to sell drones to Ukraine in the “coming days” that can be lethally armed, Reuters reported, citing three sources. The sale would be of four MQ-1C Gray Eagle drones, produced by General Atomics, which can be equipped with Hellfire missiles.

The Gray Eagle is the U.S. Army’s iteration of the powerful Predator drone, and can fly more than 30 hours, collect large amounts of intelligence and carry up to eight Hellfire missiles. Ukraine has been using armed drones with substantial success in the months since Russia’s invasion began, but the Gray Eagle would represent a major step up in capabilities.

Congress can halt the sale — which has been reviewed by the Pentagon for the last several weeks — or it can still be nixed by a change in policy, Reuters wrote.

A cargo ship is loaded with grain at the Port of Mariupol in Ukraine.

Ukraine is working with its Western partners to establish a United Nations-backed effort to reopen its vital Black Sea export routes, through which it delivers the vast majority of its grain and other produce to much of the world.

“We call on countries whose food security may suffer more from Russian aggression against Ukraine to use their contacts with Moscow to force it to lift the blockade of Ukrainian seaports and end the war,” foreign ministry spokesman Oleg Nikolenko wrote on Facebook.

Russian forces have blockaded several of Ukraine’s largest ports, and Russia’s navy has control over major shipping lanes in the Black Sea. Together, Russia and Ukraine provide roughly 25% of the world’s wheat, and the disruption to those exports due to the war and sanctions has sent food prices soaring and sparked fears of a global food crisis.

Russian forces in control of most of Sieverodonetsk: U.K.

Russia has made significant gains in a strategic city in Ukraine’s Donbas, the eastern-most city that was still under Ukrainian control and a last Ukrainian holdout in the Luhansk region.

“Russia has taken control of most of Sieverodonetsk. The main road into the Sieverodonetsk pocket likely remains under Ukrainian control but Russia continues to make steady local gains, enabled by a heavy concentration of artillery,” the U.K.’s Ministry of Defence wrote as part of its daily intelligence update on Twitter.

“This has not been without cost, and Russian forces have sustained losses in the process.”

Russian troops now will likely have to cross the Siverskyy Donets River, which stands in the way of its advance, a mission that is “vital for Russian forces as they secure Luhansk Oblast and prepare to switch focus to Donetsk Oblast,” the ministry wrote.

“It is likely Russia will need at least a short tactical pause to re-set for opposed river crossings and subsequent attacks further into Donetsk Oblast, where Ukrainian armed forces have prepared defensive positions,” it said, noting that this could “risk losing some of the momentum they have built over the last week.”

“It is a direct provocation (by Ukraine), aimed at involving the West in military action,” Russian Foreign Minister Sergei Lavrov told a news conference while in Saudi Arabia.

“It is a direct provocation (by Ukraine), aimed at involving the West in military action,” Lavrov told a news conference while in Saudi Arabia.

Previously, Kremlin spokesperson Dmitry Peskov said: “We believe that the United States is purposefully and diligently adding fuel to the fire.”

Biden administration officials are reportedly divided over what level of weapons support for Ukraine will constitute too much involvement and risk sparking a dangerous confrontation with Russia.

A young boy sits in front of a damaged building after a strike in Donbas, Ukraine, on May 25, 2022. More than 200,000 Ukrainian children have been deported to Russia, President Volodymyr Zelenskyy said in his nightly address.

“These are orphans from orphanages. Children with parents. Children separated from their families,” Zelenskyy said.

Nearly 700 children have been injured or killed as a result of Russia’s attacks, with a further 139 children missing, the president said.

Yesterday, UNICEF reported that on average, more than 2 children are killed and more than 4 are injured every day in Ukraine due mostly to attacks using explosive weapons in populated areas, according to reports verified by the Office of the United Nations High Commissioner for Human Rights.

Saudi Arabia is aware of the risks of a supply shortage and that it is “not in their interests to lose control of oil prices,” the Financial Times reported, citing sources.

The FT report comes ahead of a monthly meeting of the OPEC+ alliance on Thursday, which Russia is a part of.

Saudi Arabia, OPEC’s de facto leader, has not yet seen a true shortage in oil markets, according to the report. But that could change as economies globally reopen amid the pandemic recovery, driving demand for crude.

“Thanks allies,” Zelenskyy advisor Andriy Yermak tweeted after listing what the package would include, along with emoji showing a handshake between the Ukrainian and U.S. flags.