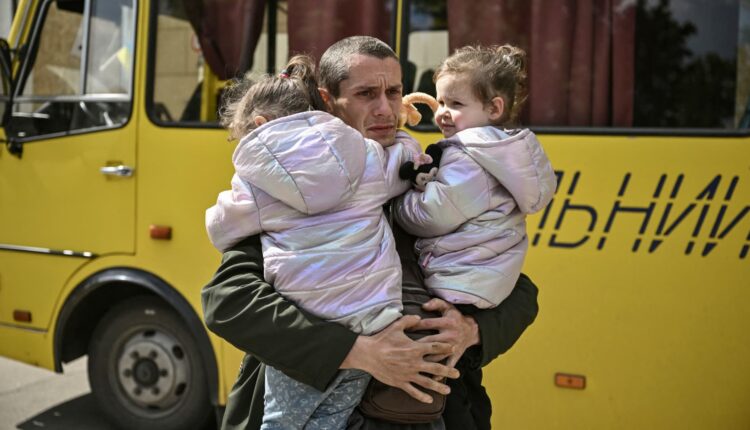 He was referring to Severodonetsk and Lysychansk, crucial remaining holdouts in the country’s east that Russian forces have almost entirely captured and that are key in Moscow’s aims to take the entirety of Ukraine’s Donbas region.

Fierce fighting continues in both cities, with most civilian areas and infrastructure completely demolished.

Zelenskyy visited Lysychansk on Sunday, in a surprise and risky move that put him on the frontlines of the fighting.

Ukrainian forces have managed to retake some parts of the embattled city of Severodonetsk in the eastern Donbas, where Russia has captured significant territory in recent weeks.

The city is seen as a last Ukrainian holdout in the Luhansk region and has been the scene of brutal street fighting and severe Ukrainian personnel losses.

“Over the weekend, Ukrainian forces have recaptured parts of Sieverodonetsk although Russian forces likely continue to occupy eastern districts,” the U.K.’s Ministry of Defence said in its latest daily intelligence update on Twitter. “Russia’s broader plan likely continues to be to cut off the Sieverodonetsk area from both the north and the south.”

“Russia made gains on the southern, Popasna axis through May but its progress in the area has stalled over the last week,” the ministry wrote, adding that Russia is likely preparing to make a renewed push in the north of the territory.

“Russia will almost certainly need to achieve a breakthrough on at least one of these axes to translate tactical gains to operational level success and progress towards its political objective of controlling all of Donetsk Oblast,” the ministry added.

Ukrainian officials have said that Russia controls more than 90% of the eastern Luhansk oblast.

Blinken says Russia is ‘exporting starvation and suffering’ beyond Ukraine

“The Kremlin needs to realize that it is exporting starvation and suffering well beyond Ukraine’s borders,” he said during a roundtable on food insecurity with business leaders and Agriculture Secretary Tom Vilsack.

Blinken noted that African countries are “experiencing an outsized share of the pain.”

Ukrainian President Volodymyr Zelenskyy has sought a corridor to export grains held up in Ukrainian ports. United Nations Secretary-General Antonio Guterres has held talks to try to free up the grain supply.