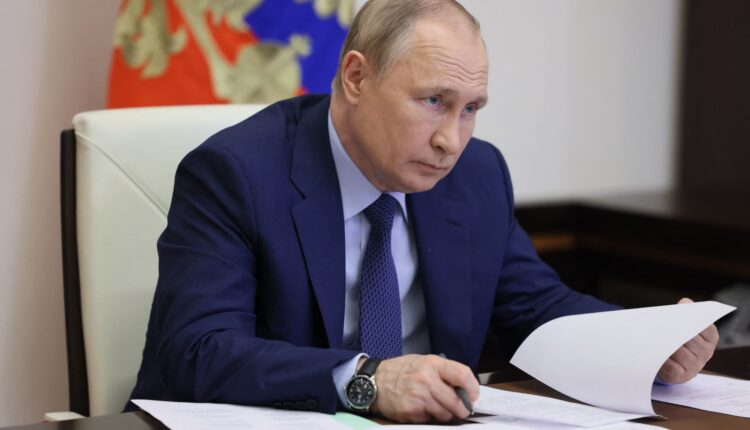 The U.K. Ministry of Defence said Russia’s offensive in northern Ukraine “ended in a costly failure.”

The ministry said Russian forces were spread “too thinly without enough support from artillery and combat aircraft.” It said those efforts were based on “wildly optimistic assessments about the welcome Russian troops would receive in Ukraine.”

“Russia has now adopted a ‘strategy of attrition’ and is achieving slow and costly gains in the Donbas” region of eastern Ukraine, the ministry said.

Russian President Vladimir Putin blamed the West for problems in global food and energy markets, warning new sanctions would only exacerbate the situation.

“It’s an absolutely short-sighted, erroneous, I would say, simply a stupid policy which leads into a dead end,” Putin said, according to Russia’s TASS news agency.

Russian President Vladimir Putin chairs a meeting on the road construction development via a video link at the Novo-Ogaryovo state residence, outside Moscow, on June 2, 2022.

Russia’s war in Ukraine has roiled the global economy, disrupting global food and energy supply chains. The two nations produce about 30% of the world’s wheat and barley. The U.N. Food and Agriculture Organization reported that food prices are at the highest levels ever recorded.

“The unfavorable situation in the global food market did not begin to take shape yesterday or even from the moment Russia launched a special military operation in the Donbass and Ukraine. It began to take shape as early as February 2020 in the process of combatting the consequences of the coronavirus pandemic,” he said, according to a TASS report translated by NBC News.

Putin’s comments come as the U.N. continues its efforts to release grain trapped in Ukraine’s Black Sea ports due to Russia’s blockade.

As the war in Ukraine entered its 100th day, United Nations Secretary-General Antonio Guterres said the conflict “already taken thousands of lives, caused untold destruction, displaced millions of people, resulted in unacceptable violations of human rights and is inflaming a three-dimensional global crisis – food, energy and finance – that is pummeling the most vulnerable people, countries and economies.”

“As we mark this tragic day, I renew my call for an immediate halt to violence, for unfettered humanitarian access to all those in need, for safe evacuation of civilians trapped in areas of fighting and for urgent protection of civilians and respect for human rights in accordance with international norms,” the UN chief said.

The UN said it is continuing work to release grain stuck in Ukraine’s Black Sea ports as well as securing fertilizer from major producer Russia. The agency estimates 1.5 billion people globally are in need of that food and fertilizer. It stressed resuming exports is key to preventing another crisis.

While humanitarian efforts have sought alternatives to maritime exports, the UN said the sea is still the “only viable solution” because of “the huge amount of cereals and other essential foodstuffs produced.” Rail and truck transportation cannot manage the same volume and have their own logistical problems, UN crisis coordinator for Ukraine Amin Awad said.