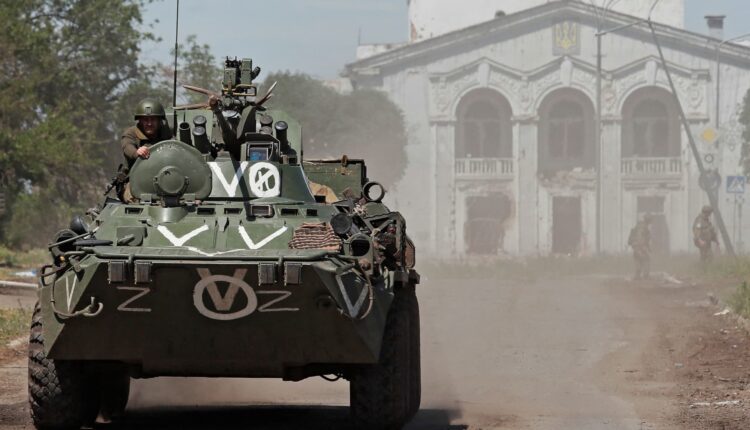 Russia controls over 90% of Luhansk, but no original goals have been achieved: UK MoD

On the 100th day of Russia’s war in Ukraine, which the Kremlin still terms its “special military operation,” Russian forces made significant territorial gains in the country’s eastern Donbas, now controlling more than 90% of Luhansk.

“Russia is now achieving tactical success in the Donbas. Russian forces have generated and maintained momentum and currently appear to hold the initiative over Ukrainian opposition,” the U.K.’s Ministry of Defense wrote in its daily intelligence update on Twitter.

That has come at a significant cost in terms of resources, as its forces have been overwhelmingly concentrated on one part of the campaign, the post said.

“Russia has not been able to generate manoeuvre or movement on other fronts or axes, all of which have transitioned to the defensive,” the ministry wrote, adding that “measured against Russia’s original plan, none of the strategic objectives have been achieved.” Among those objectives was the aim to seize Kyiv and Ukrainian centers of government.

“In order for Russia to achieve any form of success will require continued huge investment of manpower and equipment, and is likely to take considerable further time,” the post added.

OPEC+ to increase production faster than expected in July and August

OPEC+ has agreed to increase oil output by 648,000 barrels per day in July and August – a larger-than-expected amount as the Ukraine war wreaks havoc on global energy markets.

OPEC+ has agreed to increase oil output by 648,000 barrels per day in July and August – a larger-than-expected hike as the Ukraine war wreaks havoc on global energy markets.

The increase will push forward the end of the historic output cuts the alliance administered during the pandemic.

Governments around the world, including the Biden administration, have been calling on producers to raise output to dampen oil prices. However, while in theory output will be higher in the future, OPEC+ has been struggling to meet production quotas.

The additional barrels will not make up for the potential loss of more than 1 million barrels per day from Russia as the country is hit by increasing global sanctions following its invasion of Ukraine.

Russian in a shipyard for maintenance and repair works on May 20, 2022. Russia is conducting a week-long series of exercises in the Pacific Ocean involving more than 40 ships and up to 20 aircrafts, Reuters cited Russian news agencies quoting the defense ministry.

Russia is conducting a week-long series of exercises in the Pacific Ocean involving more than 40 ships and up to 20 aircrafts, according to a Reuters report citing Russian news agencies.

The exercises, which start on Friday and end June 10, would include “groups of ships together with naval aviation taking part in search operations for (enemy) submarines,” Reuters reported, quoting a statement from the defense ministry.

Ukraine lies thousands of kilometers from where the exercises are being conducted in the Pacific Ocean.

The U.N. humanitarian chief was to meet with Russian officials as part of U.N. Secretary-General Antonio Guterres’ efforts to enable Ukrainian and Russian agricultural exports through the Black Sea amid a global food crisis.

Guterres said there was no resolution as of Wednesday, but the U.N. is engaged in serious dialogue with all relevant parties “in order to find a package deal.”

Dujarric noted that Griffiths’ visit to Moscow followed a Monday visit to the Russian capital by Rebeca Grynspan, the secretary-general of the U.N. Conference on Trade and Development known as UNCTAD. Grynspan is focusing on getting Russian grains to global markets. She later went to Washington.

“We’ve seen a lot of positive statements coming from various capitals,” Dujarric said. “We also very much appreciate the role that Turkey is playing in all of this. If we have something concrete to announce, we will do so.”

Sanctions-hit Russia has limited exports of noble gases such as neon, a key ingredient for making chips, until the end of 2022 to strengthen its market position, its trade ministry said.