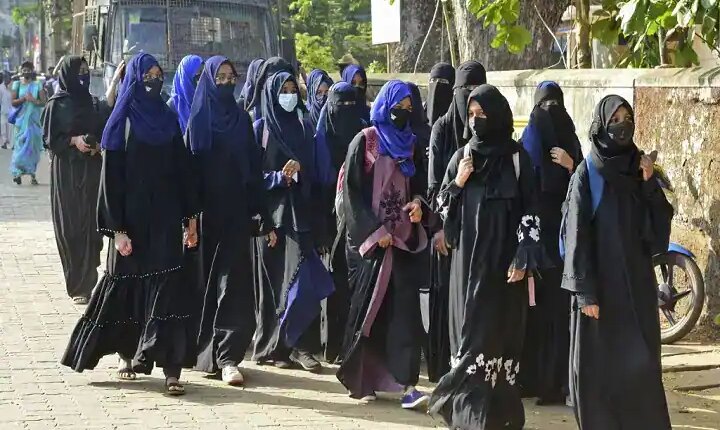 Karnataka Hijab Row: The issue of wearing hijab in Karnataka does not seem to end. Even after giving the decision of the High Court in this matter, Muslim girls are not ready to accept it. Now the management of Uppinangady Government First Grade College has suspended 23 girl students who protested last week demanding permission to wear hijab inside classes. Puttur BJP MLA and College Development Committee (CDC) president Sanjeeva Matandoor said on Tuesday that the students had protested against wearing hijab. That’s why he has been suspended.

According to sources, last week, girls came to the college in Puttur taluk of Dakshina Kannada district wearing hijab and protested demanding permission to wear hijab in class. The CDC decided to suspend him by meeting on Monday. The panel had earlier suspended seven girl students for coming to college wearing a hijab.

What is the Hijab Controversy?

The hijab protests in Karnataka took place in January-February this year when some girl students of a government girls’ college in the state’s Udupi district alleged that they were prevented from attending classes for wearing hijab. was stopped. During the protests, some girl students claimed that they were denied admission in the college for wearing the hijab. In February, the government closed schools and colleges in Karnataka for a week to control the situation. The hijab protest soon spread to other states as well and the matter went to the Karnataka High Court.

What was the High Court’s decision?

Observing that wearing hijab is not a necessary religious practice in Islam and freedom of religion is subject to reasonable restrictions under Article 25 of the Constitution, the Karnataka High Court on March 16 filed petitions by Muslim girl students. was rejected. In the petition, the girl students had demanded wearing of hijab in classes in pre-university colleges in Udupi. The court had also upheld an order issued by the state on February 5, which suggested that wearing hijab may be banned in government colleges where dress is prescribed. The court ruled that only wearing of dress (College Dre Code) would be allowed in the classes.

Prophet Muhammad: Why India cannot ignore the displeasure of the Gulf countries, know the reason

Punjab Budget: The first budget of the government will come on this date, the CM said – for the first time the opinion was taken from the common man