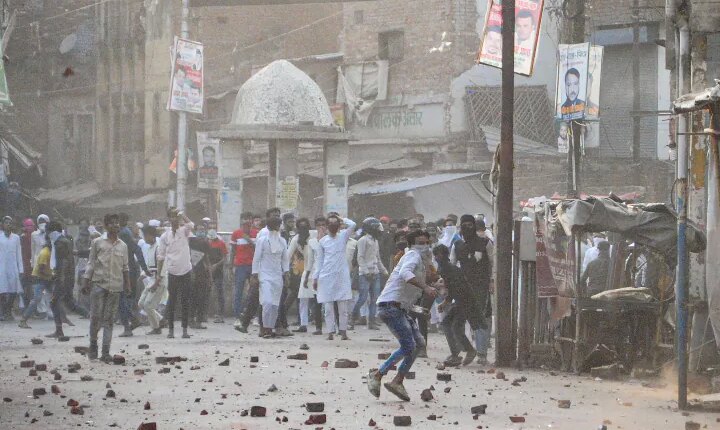 Kanpur Violence Latest Update: Violence erupted in many areas including Parade, Nai Sadak and Yatimkhana soon after Friday prayers in Kanpur. After Friday prayers, members of two communities came face to face and pelted stones at each other with bricks, a senior police officer said. He said that during this firing also took place. However, the police said that the situation has been brought under control. So far 18 people have been arrested in this case. Read 10 big things-

1. According to the police, people from the minority community were angry over BJP spokesperson Nupur Sharma’s alleged derogatory remarks against Prophet Muhammad during a recent TV debate and were trying to shut down shops in the area in protest.

2. Police said that people allegedly pressurizing the shopkeepers to close their shutters clashed with the policemen. Later, the police had to lathi-charge to disperse the crowd, he said. People were present in the market when the stone pelting started. So a stampede-like situation was created. A force of about 12 police stations reached the spot to control the situation. Police lathicharged.

3. In the case of this ruckus in Kanpur, 18 people have been arrested. while the chief minister Yogi Adityanath Has spoken of strict action. The CM said that the culprits of the case will not be spared under any circumstances. After the order of CM Yogi, the police said that the gangster act will be imposed on the accused and their property will be confiscated or demolished.

4. The official also said that some local leaders, including MMA Jauhar Fans Association president Hayat Zafar Hashmi, had called for the closure of shops on Friday.

5. He said that these leaders had taken out a procession against the alleged insult to Prophet Mohammad and during this they clashed with members of other community which led to clashes. Soon, hundreds of people took to the streets in protest. Many people have been injured in these clashes, in which more than half a dozen are seriously injured.

6. Kanpur District Magistrate Neha Sharma said that ‘members of a particular community came out on the road in protest and got involved in violence. The District Magistrate said that several people were seriously injured and were sent for medical help. Heavy police force has been deployed in the affected areas.

7. He said that strict instructions have been issued to closely monitor the situation and ensure that there is no further violence. He said that investigation has been started and several people have been detained for questioning. He said that the exact cause of the violence has not been confirmed yet.

8. When this ruckus happened at that time, due to the arrival of PM Modi and the President, there was a lot of security arrangements. PM Modi, along with the President, about 70 km from the city. were present at the distance program.

9. Akhilesh Yadav tweeted and wrote, “Your Excellency Rashtrapatiji, despite being in the city of Prime Minister and Chief Minister, BJP leader for the unrest in Kanpur, due to the provocative statement given by BJP spokesperson Nupur Sharma due to the failure of police and intelligence. be arrested.

10. The UP Congress has said that in a city where the President, Prime Minister and Chief Minister of the country are present, the clashes and violence between the two groups is beyond comprehension. People should understand this conspiracy of ‘divide and rule’ of BJP. I appeal to you to maintain peace at all costs without getting angry on anything.

read this also- UP Politics: Maulana Tauqir Raza adamant on the arrest of BJP spokesperson Nupur Sharma, alleging objectionable remarks on the Prophet