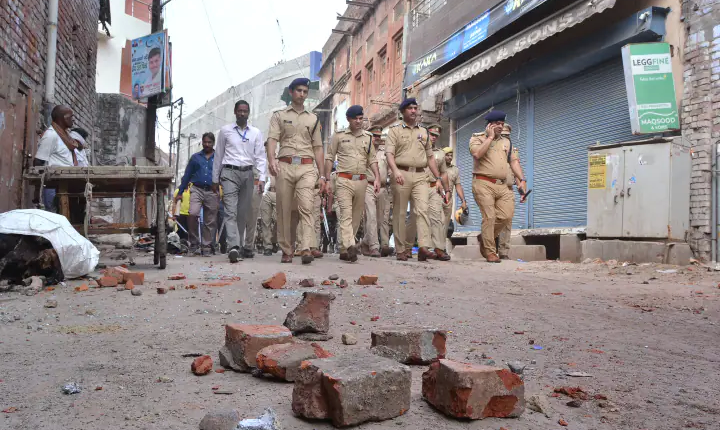 Kanpur Violence: As the investigation of the violence that erupted in Kanpur last Friday, many new faces are coming to the fore. The SP connection of violence is also coming to the fore. On the other hand, the decision can come today regarding the police remand of Hayat Zafar Hashmi, the main accused of Kanpur violence. UP Police wants to interrogate Zafar Hashmi by taking him in remand for 14 days. Hayat Zafar Hashmi is accused of spreading violence and inciting people in Kanpur. Meanwhile, the UP Police is monitoring five Muslim-dominated areas of Kanpur through drones. Kanpur is probing the violence, the police is also checking the mobile phones and WhatsApp of the arrested accused. As the investigation is progressing, new faces are emerging. Violence mastermind Hayat Zafar Hashmi’s mobile has been found in many WhatsApp groups.

What is the SP connection to violence?

In this WhatsApp group, the name of Samajwadi Party’s Kanpur MLA Irfan Solanki, SP MLA Amitabh Bajpayee has also appeared. The question is arising that this is a group that is trying to incite people, how are the leaders of the Samajwadi Party in that group. BJP has demanded action against Samajwadi Party leaders.

ED’s entry is going to happen soon in the Kanpur violence case. According to information received from sources, the Kanpur Police is preparing to give the details of Zafar Hayat’s bank account and money to the ED. Along with this, the police will also share information about the money and funding of people associated with PFI. Police has arrested three people regarding PFI connection. The trio have been identified as Saifullah, Mohammad Naseem and Mohammad Umar. These three accused were also involved in CAA and NRC riots and were sent to jail.

According to the information that has come out, these three were in contact with the main conspirator of the violence, Zafar Hayat Hashmi. These people had also done the work of mobilizing stone pelters in the violence on last Friday. So far, the police have arrested 50 accused in the Kanpur violence case. Some of them are minors as well. So some people have surrendered themselves there.

Before the ruckus, the police have got clues of funding in the accounts of Johar Fans Association. Police and ATS are jointly investigating the matter. Although no official is ready to say anything officially on this. It has also been learned that funding took place in these accounts during the riots against the CAA-NRC. It is worth noting that during a debate, this violence erupted after Friday prayers in Kanpur over controversial remarks made by Nupur Sharma on Prophet Mohammad. There was also an incident of stone pelting during that time.

read this also: Kanpur Violence: ED’s entry in Kanpur violence case will happen soon, police is going to do this work