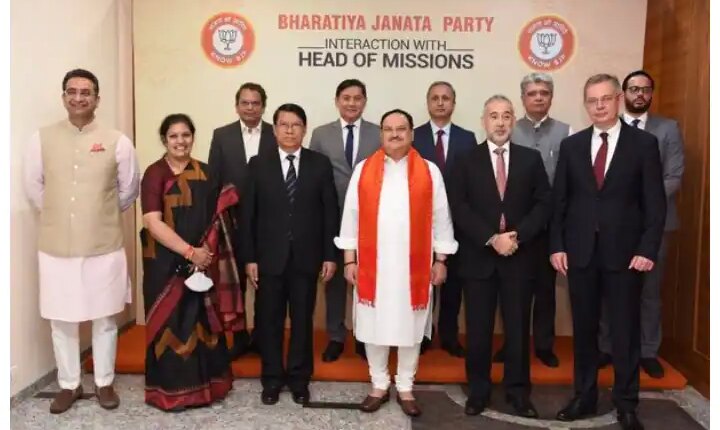 JP Nadda in Know BJP: In the national capital Delhi, Bharatiya Janata Party President JP Nadda on Saturday met envoys of seven countries, including Russia, at the party headquarters in Delhi. During this, he has held talks with foreign envoys under the ‘Know BJP’ initiative. It has been informed from the party that JP Nadda has so far held talks with a total of 34 foreign envoys under this initiative.

The BJP national president on Saturday held talks with envoys from Laos, Russia, Cuba, Tajikistan, Kyrgyzstan, Uzbekistan and Turkey. According to the information, this meeting lasted for about three hours. The party’s foreign affairs chief Vijay Chauthwale says that India’s global identity has increased under the Narendra Modi government. Due to which foreign envoys are being introduced to the history and vision of the party.

Program can be done in three to four sessions

According to Vijay Chauthwale, in the coming days, BJP is going to increase this campaign further, under which talks will be held with ambassadors of other countries. Chauthwale says that BJP can hold three to four sessions of ‘BJP ko Jano’ this month. During this, plans are being made to increase the party’s talks with other parties of the country.

made aware about BJP

Vijay Chauthwale says that Prime Minister Narendra Modi Due to the grand vision of BJP, a different identity is being made in the world. In such a situation, every person in the world is recognizing India better through the achievements of the BJP-led government. He says that now there is a need for more awareness about BJP among foreigners as a party.

Organization information given in the program

According to Chauthwale, envoys of seven countries attended party president JP Nadda’s ‘Know BJP’ program, in which two ambassadors could not attend due to some reasons. During this, JP Nadda has given information about the expansion of BJP, the steady increase in membership and the structure and role of BJP’s departments and frontal organizations.